The Twilight Thriller is a highly anticipated race in our house. Ty goes all out for the costume contest, even outfitting the stroller to go with a family costume each year. He had won the contest the last 5 years straight. Check out last year's post here for pictures of all his stroller costumes. He won the year before Carter was born dressed as a lawn gnome, but I don't have a picture of it in the collage. This year he injured his ankle early in the fall season so he wasn't going to run the race and thought about not going all out for the costume contest, but eventually decided to go ahead and do it and just walk the race with the stroller. It was a bit of a last minute decision within weeks of the race so he decided against the Star Wars plan he had decided on last year when we found Chewbacca and R2D2 costumes at Goodwill for the kids. He eventually landed with the Flinstones which he thought would be a relatively easy thing to do with the stroller. Elise was Pebbles, Carter was Bam Bam, Ty was Fred, and I was Wilma. We went to the pumpkin patch earlier in the day with my best friend and her kids and her son, Hayden, decided he wanted to do the race with us. My mom last minute made him a Dino costume so he could be part of our group costume. Mom, dad, and Thomas were all dressed as pigs while Jeremy was the Big Bad Wolf. They had face paint on and Carter wanted some so Thomas painted his eyebrows black. Carter loved it so much he wanted to leave it on the following day so we did. 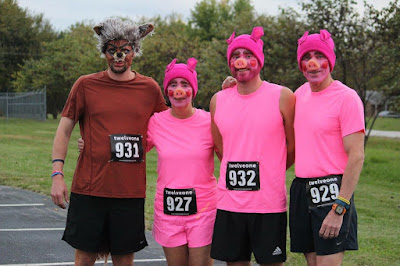 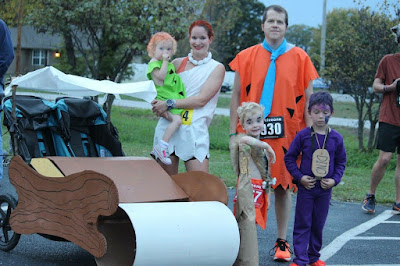 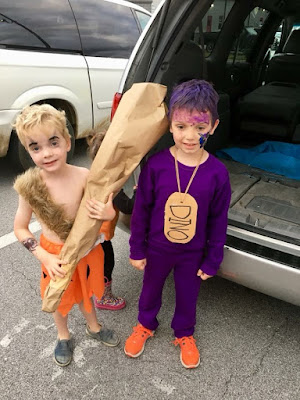 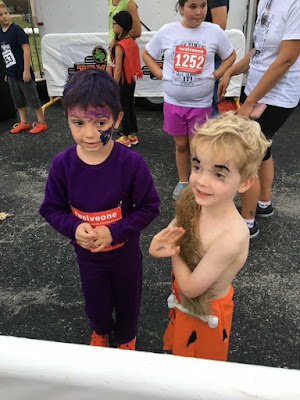 The fun run was first and Carter kept saying he wanted to run by himself with no one with him. I decided to let him do it since the course is all on a gravel trail, but I was a little bit nervous. They took off and Hayden was really sprinting. I could tell Carter wanted to go with him but didn't want to start off too fast. Once they settled into pace, Carter caught up to Hayden and they ran together. I planned to hang around and watch them finish before running my warm-up but got a little nervous about them out there with no adult so I took off out on the course for my warm-up. I ran out to a little before the turn around until I saw the boys make the turn together and then ran back to watch them finish. Carter was a ways ahead of Hayden when they finished. Hayden was walking and looked super hot in his sweatsuit since it was nearly 70 degrees! They both had fun and sprinted in to the finish. I didn't start a timer on my phone because they normally have a finish line clock at the race but they didn't. I looked at the time after Carter finished and it was 6:12, the race was supposed to start at 6:00 but I don't know if it started on time. So I'd guess his time was somewhere around 10-12 minutes but I'm not sure. The boys were super excited about their finisher's medals and we later discovered that the ghost on the medal glows in the dark! 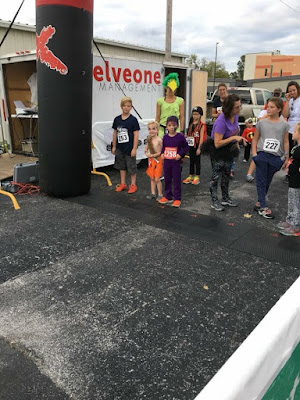 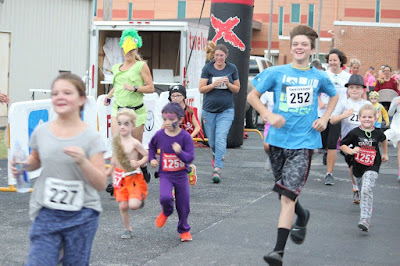 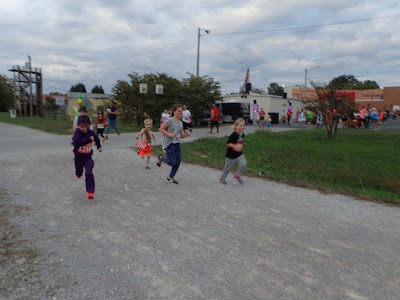 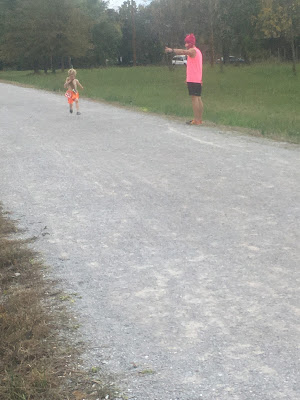 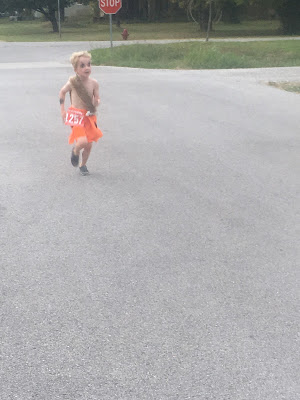 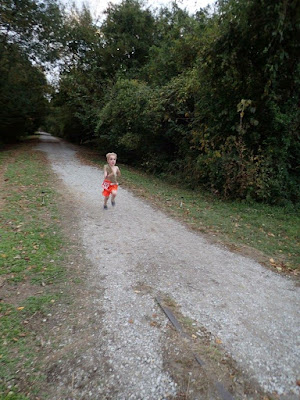 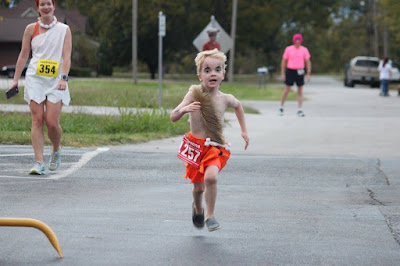 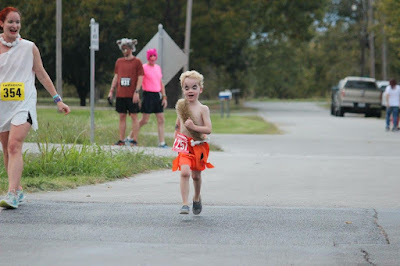 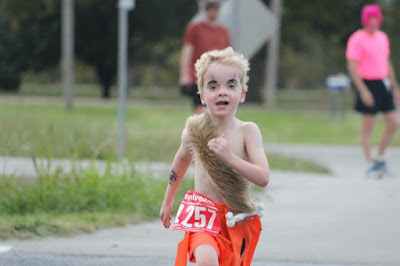 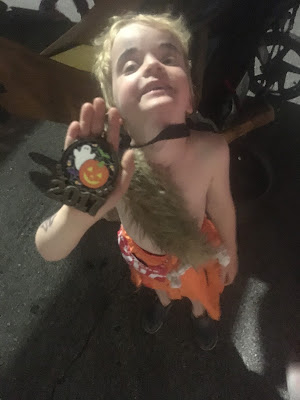 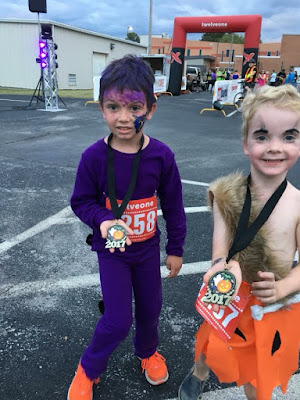 Going into the 5k I was hoping to be able to run around 6:45 pace. The weekend before I ran the 5k/22 mile combo and although I felt great during my long run, I wasn't recovering as quickly as usual. My speed workout on Wednesday was tough and my legs weren't feeling back to normal on Thursday during my easy run. During the day on Thursday my shin started feeling sore again so I decided to skip my Friday run as it would most likely do more harm than good. Once Saturday came around my shin was feeling fine but I was a little skeptical that I'd be able to hit my goal pace. We took off at the start and there were quite a few females ahead of me. There was a high school group all in pink tank tops and there were bunches of them ahead of me. By the mile mark I had passed them all and was running on the heels of two girls who I was fairly confident were the top females in the race but I wasn't sure. I went through the first mile in 6:45, right where I'd hoped to be! I settled in right behind those girls and felt decent at that pace. At one point we had to cross a street and the girls started to stop but I kept going so I passed them. Once they knew I was there they picked up the pace and I struggled to hang on. By the half-way point one of them had fallen behind me and I was close on the heels of the one in front. When we started seeing people coming back from the turn around I knew there were no other females ahead of me. 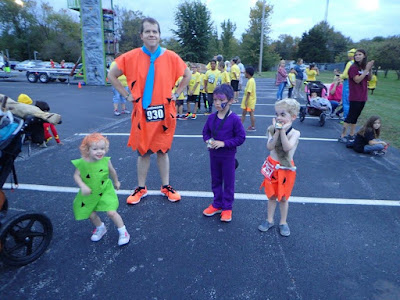 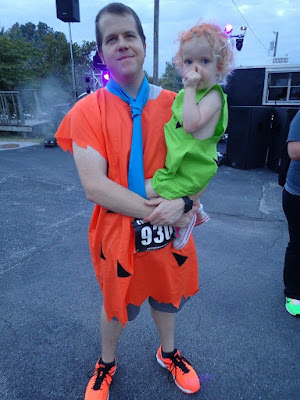 I went through mile 2 in 6:53 which was a little discouraging as I'd fallen off pace. I had really been focusing on staying on the girl ahead of me and felt like I was pushing the pace. During the 3rd mile I kept trying to pick up the pace and gain on the girl ahead of me, but each time I tried to surge it seemed she did too and I really wasn't making up any ground on her. My legs weren't responding very well either and I felt like I couldn't pick it up like I wanted to. As we neared the finish with about a quarter of a mile to go, her coach yelled at her that she had a lady coming up on her and she took off in high gear. At that point I knew there was no way I could catch her and I just tried to push it in as much as I could. I really felt like I didn't have a very good kick because my legs felt tired and because she pulled away from me so much at the end, but I had run the last section of the race at 6:02 pace so not a bad finishing kick for me right now. My 3rd mile split was 6:44 which put my average at 6:46 according to my Garmin. I was pleased I was so close to my goal pace which I was worried would be a stretch given my current situation. I was a little disappointed I hadn't been able to catch the girl ahead of me but I knew it wasn't due to lack of effort. I ran my cool down out to mom and finished the race with her. Then I ran back out to Ty and walked to the finish with him. He had Carter and Elise in the stroller and Hayden riding while standing in the back. He said the easiest way to push the stroller was to lift the front wheel off the ground. It looked like a circus but apparently had been worse earlier in the race when he had Elise on his shoulders and the 2 boys in the stroller. 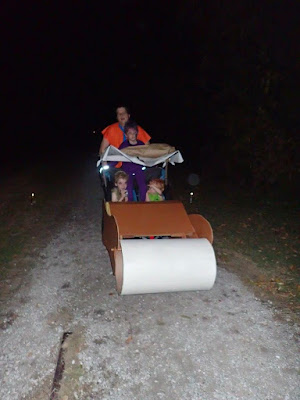 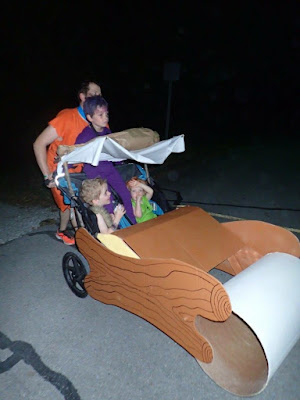 We hung around for awards and the costume contest. They had a rock wall and the kids enjoyed playing on it. They also had smoothies for finishers which were perfect since it was so warm. I finished the race in 21:11 which put me 1st in my age group, 2nd female, and 13th of 139 overall. Jeremy finished in 21:39, good for 2nd in his age group and 17th overall. Thomas came in in 22:28 which was 1st in his age group and 21st overall. Dad finished in 25:35, 3rd in his age group and 34th overall. Mom finished 1st in her age group and 85th overall with a time of 35:33. Ty walked the race pushing the kids in the stroller and turned around a little before the half-way point. He said the kids all ran at the beginning of the race. I wish I could have seen that! We waited around for the costume awards which they did at the end. Ty won the best group costume and then mom, dad, Jeremy, and Thomas won for funniest costume. So we left with medals and trophies all around! It was another fun Halloween race in the books! Now I'm looking forward to my first race of the season that won't be following a 20+ mile long run the weekend before. We have the Tulsa Run 15k coming up on Saturday! 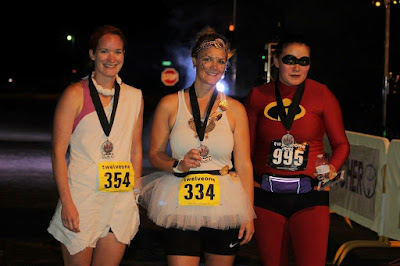 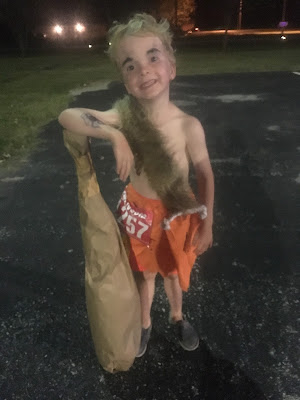 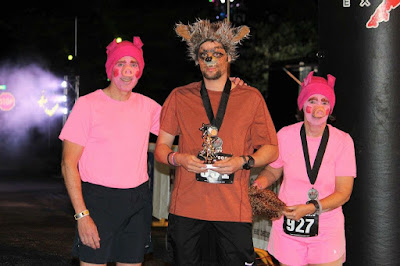 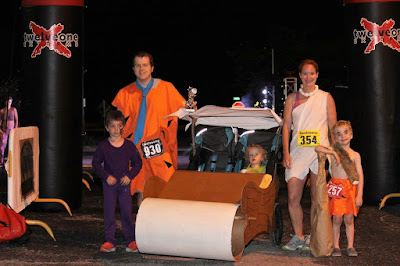 Posted by Liz Runningmomma at 8:03 PM