A Day at the Fair

As I mentioned in my post about the Corndog Challenge 5k, I did not win megaride passes to the fair this year. Ty and I discussed what our best options were as Carter has been asking when the fair was coming back pretty much since it ended last year. We didn't want to spend a bunch of money and I was tempted to just not go this year, but Carter was so looking forward to it and we didn't want to disappoint him. Ty remembered from previous years that we were able to get the most bang for our buck on a weekday vs. the weekend because the lines were shorter so we could get more rides in. I looked at the different promotions and saw that you could get $10 off a one-day ride pass on Monday with a coupon from Mazzio's. That meant Carter could ride as many rides as he wanted for $30. That was definitely the way to go! I planned to go when the fair opened Monday morning with both kids and then go back with Carter after naps. Once we were there I decided to buy 2 ride passes, thinking I could have it put on my wrist but then slip it off and put it on Elise's wrist in the morning. Then I'd move it back to my wrist during the day. Although a great plan, there was only 1 ride Elise could actually go on by herself without an adult so there was no point. I ended up buying her 22 tickets. We had such a fabulous time at the fair and I'm so glad we went. I just want to share the memorable moments here. 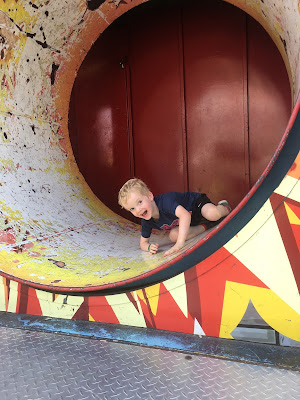 When we first arrived Elise said she didn't want to ride any rides but once she saw Carter do a few she decided she did want to do some rides. The first thing she did was a fun house with a maze inside where it was hard to tell where to walk due to plexiglass walls. The first time she went through with Carter in front of her. The second time he got enough ahead of her that she couldn't see him. She almost immediately walked very hard straight into one of the glass walls with a loud bonk. She did that a couple more times before permitting me to get in front of her, leading her through the maze. Elise's first real ride was a motorcycle ride. She was strapped in on the motorcycle behind Carter. When it first lurched forward she had a look of fear and surprise on her face. The moment Carter started laughing I saw a smile spread across Elise's face and she got off the ride laughing. Carter was the sweetest big brother. Each time Elise rode a ride without me, Carter ran back to where she was and unstrapped her and helped her down off the ride. It was the sweetest thing and I loved to see his care and concern for his sister! 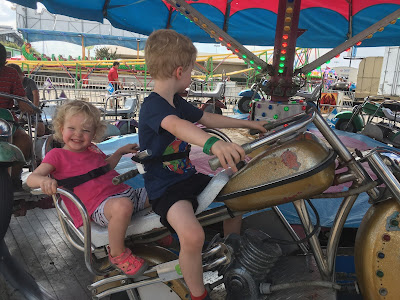 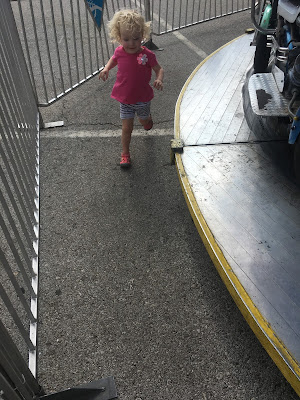 Carter loved that he was tall enough this year to ride a lot of the rides by himself and it worked out great for us because he'd ride the ride by himself and I'd ride with Elise. Many of the rides, he'd yell across talking to me and Elise. Since Carter and I both had ride wristbands there were a few rides Elise got on without tickets so she ended up riding $37.50 worth of rides for $25. One she got on without tickets was the ferris wheel. I've never really been afraid of heights but last year riding the ferris wheel with Carter, I was terrified. This year wasn't quite as bad because there were fewer people getting on at the same time as us so we weren't sitting suspended for long periods of time while other people got on, but it was still a very different experience riding with my kids! I was very nervous one of them would stand up and somehow fall out of the basket. Elise was happy to have my arm wrapped around her and I held onto Carter's leg so I could pull him down if he stood up. Even just thinking about the experience is making my hands sweat! 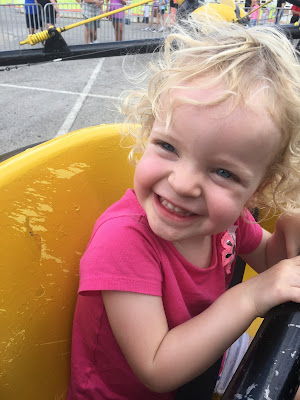 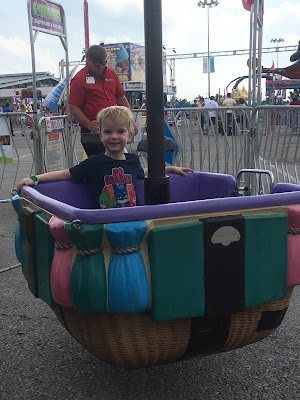 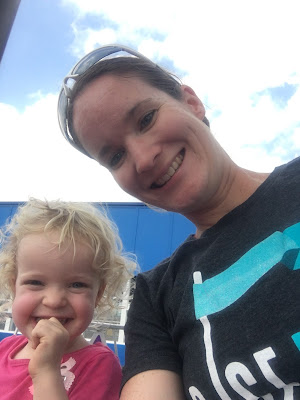 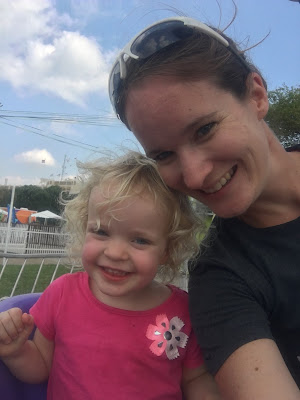 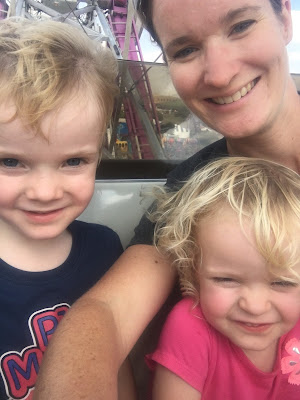 Elise's first ride all by herself without me or Carter on it with her was the helicopters. At first she looked a bit unsure but by the end was playing with the wheel and the stick shift. It was so cute to watch! She could have ridden with Carter and I tried to convince her to do so, but she was dead set on riding in the particular helicopter she chose. I was glad it worked out. The rides opened at noon and we stayed until 2:30. I packed lunchables and left them in the car because you aren't supposed to take in outside food or drink. I figured we'd leave when the kids started fussing that they were hungry and they could eat lunch in the car on the way home. They were having so much fun they never even asked for food! We just kept going until Elise ran out of tickets. They ate their lunchables on the way home and I put Elise straight down for a nap right around 3:00. I told Carter if he wanted to go back to the fair when daddy got home, he needed to take a nap and he actually did! 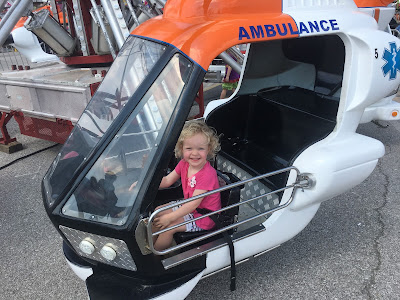 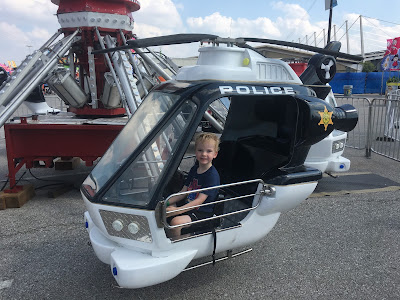 When Ty got home Carter and I ate dinner and then headed back out to the fair. Carter was really excited to ride the rides he was tall enough to ride but only with an adult. We couldn't do those rides earlier in the day because Elise wasn't tall enough to ride even with an adult and I couldn't leave her waiting by herself. Our first stop was the bumper cars which he was only allowed to be a passenger in but I let him reach across and steer quite a bit. We also did a really tall slide which involved walking up a crazy long and steep ramp to get to. Doing it the day after a 20 mile run was a bit difficult! Carter wanted to do it back to back and after the second time I was hoping he'd want a break before doing it a 3rd time because my legs were tired! He was also very excited to do a water ride which I wasn't too thrilled about. As we were going up in preparation to slide down into the water below, Carter said, "I shouldn't have picked this one! It's too high!" I was cracking up. I'm pretty sure we rode every ride Carter was tall enough for at least once! One was a Haunted House Roller Coaster which was basically just riding around inside a dark building. When we turned a corner a body would light up with blood on it or something. Later we were walking to the animal area and Carter heard some kids talking about going on it. Carter ran back to them and informed them it was really scary. Some people standing around overheard and were laughing! We capped the night off with checking out the livestock area. There was a pig who had delivered piglets that morning and a goat who had just delivered kids. We enjoyed seeing the babies! Because I like to know how well we utilize things like memberships and deals like ride passes, I kept track of all the rides we rode to make sure our ride passes were worth it. Carter rode $115 worth of rides on his $30 ride pass and I rode $57.50 worth of rides on my $30 ride pass. I'd say we got our money's worth! Pictures from last year's trip to the fair are in this Wordless Wednesday post.