To me while we were doing puzzles, "You aren't very good at this but I like how you keep trying. You're not giving up!"

Me: Elise get in here right now!
Elise: One second!
Carter: She doesn't understand what one second means. She thinks it means just sometime later.

While watching the new Beauty and the Beast when Emma Watson comes on the screen, "She looks just like you, mommy!" Belle is my favorite princess!

Also while watching the new Beauty and the Beast, "Why did her dad go into a house when no one invited him." I was cracking up over this because I've been teaching him during Meals on Wheels that he can't just walk into other people's houses without being invited. I also thought it was funny that with all the strange things in the movie, such as a giant beast and objects that can talk, that was his biggest concern.

On a walk Elise walked through some kind of bush that had needles that got stuck all over her. Carter looked over at her and yelled, "Elise looks like a porcupine!" 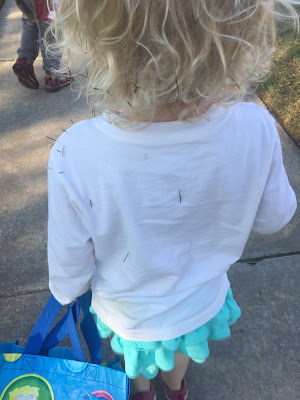 I don't really have anything for Elise this time for some reason. I'm sure she's said some funny stuff and I just forgot to write it down. I do want to document that she calls monkeys "ooh ooh ahh ahh"s. She also calls trains chugga chugga choo choos and owls are whooo whooos.

Elise has mastered spinning around in a full circle. She kept doing it and Carter thought it looked cool so he tried but he kept falling down. Elise would say, "Do it like this Carty," and then she'd model it for him. As she stood watching him try it she'd say, "Good try, Carty! You almost did it! That's it! Try again!" It was so absolutely adorable!

Posted by Liz Runningmomma at 12:06 PM