There's a really fun festival in my hometown over Labor Day weekend called Little Balkans Days. Ty's fantasy football league does their draft that weekend so we tend to find ourselves in town for the festival every year. We did the Little Balkans 5k a few years when they ran the race on Saturday morning but they switched the race to Friday evening last year so we didn't make it. When we were getting ready to go to the Blue Moon race my friend, Erin, and her kids were over at our house. Her son, Hayden, really wanted to go to the race with us. My mom told him she'd invite him to the next fun run in town so he could do it with us. That happened to be the Little Balkans Fun Run which is a free event for kids. The kid's fun run started at 6:30 so we wouldn't be able to make it if we picked Ty up from work and then headed to the race. We decided the kids and I would drop Ty off at work and then leave from there to head to my parents' house. Then Thomas would pick Ty up from work and they'd head out. I planned to run 14 miles on Saturday or Sunday so I didn't want to run the race with the stroller and planned not to run the race. Thursday at work Ty found out if he went in at 7:30 on Friday morning he could leave work at 4:30 so he decided to do that. While I was running that evening I decided I might as well run the 5k instead of running alone earlier in the day. Ty and Thomas wouldn't get there in time for the fun run but they could get there a little bit before the 5k started so I'd be set to run without the stroller. I'd just move my long run back to Sunday and take the race easy at more of a tempo pace than a race pace.

The starting line was right by a playground which the kids enjoyed playing on before the race. As I was signing up for the race I heard someone ask about the distance of the fun run. I had assumed it would be a mile since pretty much all fun runs are that distance. It turned out the race was around a half mile but they weren't sure exactly how far it was. I figured that would be perfect for Hayden's first race and Carter would really enjoy that. We headed over to the race start and Carter was so excited giving Hayden pointers and talking to him about race strategy. It was so cute to hear him. He said, "Hayden you don't want to start out running too fast or you will get a side stitch and it will hurt to run. Then you will have to walk." The boys stayed together and I ran with them. Erin was with her daughter, Addison, who wasn't signed up but decided she wanted to run and mom was with Elise who ran parts of the race. At one point Hayden told Carter he was getting tired and Carter said, "If you get tired you can walk for a little bit and then start running again after a break." They even held hands for a little bit at the start of the race. Hayden walked for a bit and Carter kept running. Once Carter was ahead of Hayden he wanted to stay there and kept checking to see how far back Hayden was. I started my Garmin just for fun to see how fast Carter ran and what the distance of the race was. As we neared the finish line we saw Ty standing there cheering us on and I got so excited I forgot to stop my watch. So Carter ran faster than what my Garmin said, but I'd say it was pretty close. The race was 0.62 of a mile long and Carter finished a little under 6:22 which was when I remembered to stop my watch. That put him at 10:14 pace so a little faster than that if I'd stopped my watch. I was very impressed with him. He was back to his regular form from the first two summer series races and did a great job pacing himself. He's really good about running his own race and doesn't worry too much about passing or beating people around him (unless it's his best friend, haha). 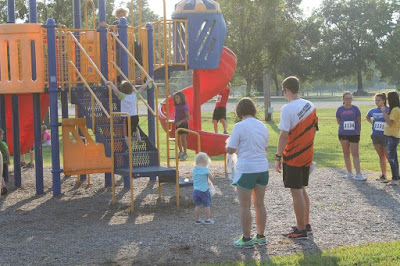 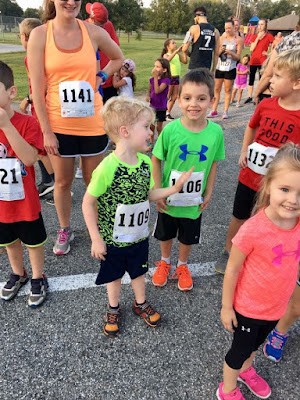 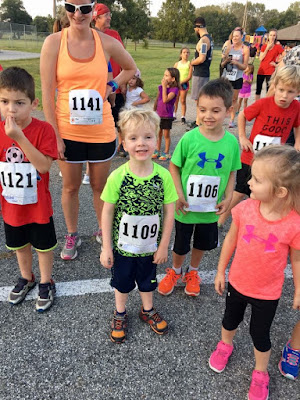 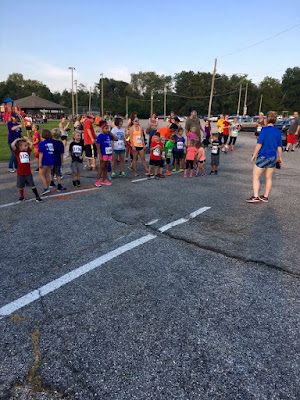 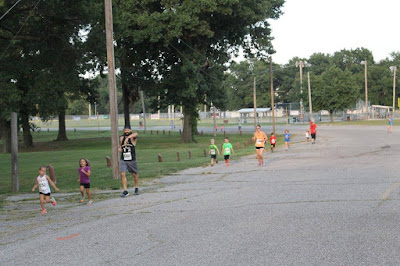 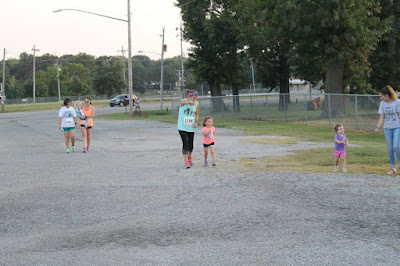 Ty took over with the kids and I headed over for the start of my race. I looked around at the crowd and figured I had a good chance of finishing as the top female. I figured I'd take off around 7 minute pace the first mile and see where that put me. I figured I could run the 5k in 7-7:30 pace and still feel fine for my 14 mile long run on Sunday. Two women took out pretty fast but by the mile mark I had pulled even with them. I had planned to just hang on whoever was the top female for the second mile but she was slowing significantly and we were going uphill so I went ahead and just powered up it. I went through the first mile in 6:53 which was a little faster than where I'd been hoping to keep my pace to ensure my legs wouldn't be too tired for my long run so I slowed the pace a bit. Jeremy caught up to me and passed me. There were a few guys out ahead of him. The course was 2 loops around the park area and I had intended to see where we were when I went through the first lap to see if the course was going to be accurate, but I got excited to see Ty and the kids so I forgot. Jeremy passed one of the guys ahead of him and I was reeling that guy in too. I went through the 2nd mile in 7:04 and contemplated dipping back under 7 minutes for the last mile. On a turn I peeked to see what kind of a lead I had on the 2nd female and realized I could walk for a while and she still wouldn't catch me. Although I really wanted to pick it up for the last mile I decided I should be smart and downshift to save my legs for Sunday. I went through the last mile in 7:23 pace and then picked it up toward the finish. I saw Jeremy start sprinting and was surprised he was kicking it in so early. Then I realized as I neared the finish that he was closer to the finish than I had realized. Carter ran the last portion of the race in with me and I finished in 21:50. I ran my cool down back to mom to finish with her. 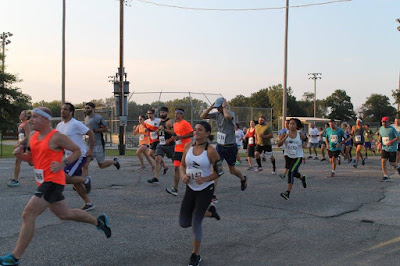 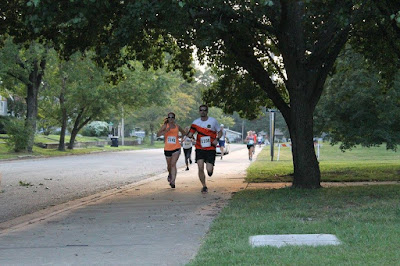 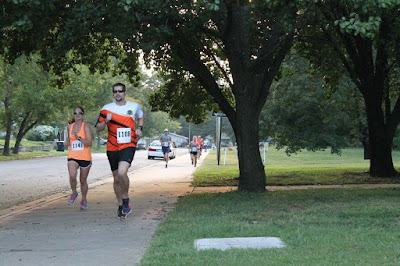 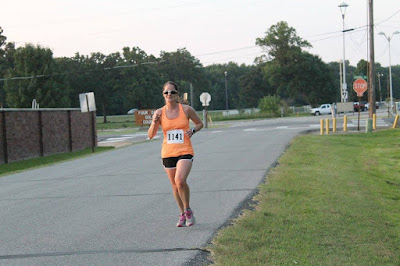 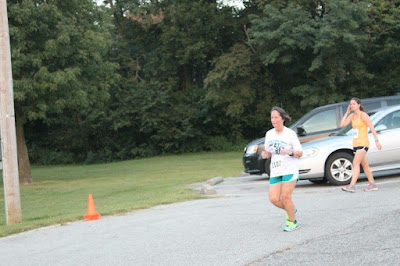 We stayed for awards. The kids enjoyed playing on the playground some more while we waited. Jeremy placed 3rd overall and 2nd in his age group in 20:43. I finished 4th overall and 1st female in 21:50 and mom was 1st in her age group, finishing in 34:49. We saw Hayden the next day and he was so proud of his race, he was wearing his race shirt! It was very cute. We enjoyed more Little Balkans festivities the next day with arts and craft vendors as well as inflatables for the kids to play on. It was a wonderful weekend! Jeremy and I ran our 14 mile long run together on Sunday and even though we waited too late to get out and ran in the heat, we still finished in an average of just under 9 minute pace. We felt good so running the race on Friday worked out for us. I think I ran the race perfectly to where I wasn't sore afterwards and didn't have a problem coming back for the long run on Sunday.
Posted by Liz Runningmomma at 11:42 AM