The second week of school for Carter was his first week going a full day. Their first week of school is just a half day to help the kids adjust. All last year he really wanted to eat lunch at school but he didn't want to nap at school so we kept him in just a half day. This year he was really excited about eating lunch at school but again was scared of napping at school. I'm not sure exactly what he was nervous about. I think there were various factors. He voiced to me that he was worried because I wouldn't be there with him at naptime and he might be the only kid who sucks his thumb. When I dropped him off on his first full day I was surprised that I was really nervous. I see how much he eats every day at lunch and I had packed him about what he'd normally eat with a little more food but I was so worried he wouldn't have enough food and he'd get hungry. I think that was mostly due to the fact that it was the first time he'd be eating lunch away from me with no option of extra food if he needed it. It made me flash back to his first day of daycare when I freaked out about him getting hungry and sent him with 50 ounces of pumped milk, read about that here, and when I picked him up he'd only eaten 8 ounces during the day. I guess what they say is true, some of those fears just never really go away. Carter's teachers this year have a Facebook group for their class and they've posted a few pictures of the kids already. It's so nice to see what they are up to at school. The classroom pictures of Carter in this post all came from that Facebook page. 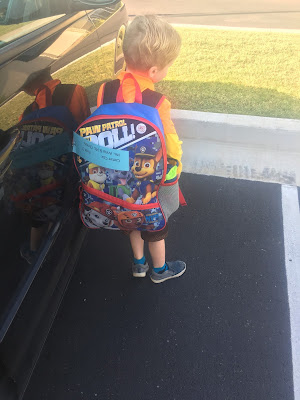 Carter did a wonderful job on his first full day and was so excited to tell me all about rest time and how one of his friends laying by him tooted. He even had a little food leftover in his lunch box which he ate on our drive home. Leaving for school on his 2nd day of the week he told me, "Mommy, I'm used to my new friends and my new teachers now." I was so proud of him. He keeps talking about a boy in his class named Liam and even knows the boy's last name. He also talks a lot about a girl named Charlee and even told me a funny story about how the teachers couldn't wake her up at the end of rest time because she was so tired. I love to hearing him talk about his friends. At the Open House when Carter's teacher told me they would be memorizing a bible verse each week or every other week I was a bit skeptical. It didn't seem developmentally appropriate to have 4 years olds doing that. But then the first week Carter came home so proud to recite for me, "Venagers (Genesis) 1:1, In the beginning God created the heavens and the Earth." He has been telling me what day it was at school, Thursday was Day 5. Then he'll tell me what God created on that numbered day according to Genesis. This week he was correctly saying Genesis instead of Venagers but I kind of missed hearing Venagers. At least Jesus is still Cheesus.

Elise still asks to pick Carter up but not as frequently and she hasn't been asking me where Carter is. She'll say, "Carty at school. We go pick him up?" On Tuesday when we came home at lunchtime without picking Carter up first she was shocked when we arrived home and he wasn't there waiting on us. The rest of the week she asked if we were going to pick him up when we arrived home at lunchtime and when I'd tell her no, she'd groan. I've been trying to make it home as close to 11:30 as possible so I can feed her lunch and then put her down for a nap by noon. On Tuesday and Friday she woke up on her own a little after 2:00 when we needed to leave to pick Carter up. On Thursday I had to wake her up. I always hate waking a child from a nap, but it works better to put her down earlier than to wait until after I pick Carter up and we make it home because who knows if she'd even sleep at that time. 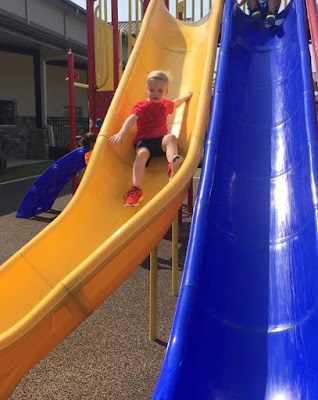 I didn't get much sleep last night so I was really tired this morning and had Carter do pretty much all the getting ready on his own. He was a champ and did a great job. He decided to put a long sleeved shirt on underneath his short sleeved shirt and when I suggested he take it off, he refused. I didn't want to fight with him about it so I let him leave it on even though the high was supposed to be 95 degrees. When I picked Carter up they told me he refused to take his long sleeve shirt off so he got really sweaty on the playground. My thought is, if he's not complaining about being sweaty, who cares. I asked Carter what he said to his teacher when he was asked to take his shirt off thinking maybe they relayed the story to me because he was disrespectful when they asked him to take it off. He said they asked him to take it off and he said, "No, thank you." I just had to smile. Last year when I was picking Carter up I was hearing stories about how he hit or kicked someone when they got into a tussle over a toy. This year I'm hearing about how he won't take off a long sleeved shirt. That makes me so darn happy! If that's the biggest problem my child is causing at school, I will celebrate that! I remember last year one mom talking to the teacher because she was worried her daughter wasn't washing her hands for long enough while at school. I couldn't help but think, I wish that was the biggest problem I was having with my child at school. Well, here I am with a pretty trivial problem and I couldn't be happier! Let's hope it continues that way! 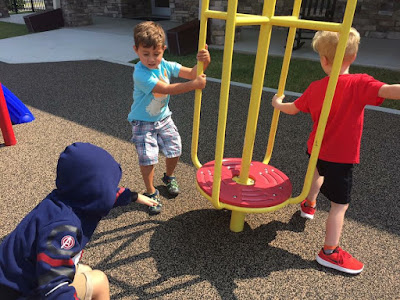 Posted by Liz Runningmomma at 7:07 PM