Saturday was the last race in the summer race series we enjoy doing each year. Carter ran the fun run at the first two races and had a blast, running an 11:12 and a 10:58. Elise somewhat ran at both of the other races as well. The first one she ran until she saw me and Carter headed back after the turn around and wanted to turn around then too. At the second one after she saw us she wanted to be carried. Mom and I had it planned out that I wouldn't cheer for Elise when Carter and I went by this time and hoped that would keep her from getting distracted by us so she'd make it to the turn around. We went out for a late lunch at Jimmy's Egg and filled up in hopes that no one would get hungry before the race. I usually feed the kids dinner before we leave but neither of them wanted anything. 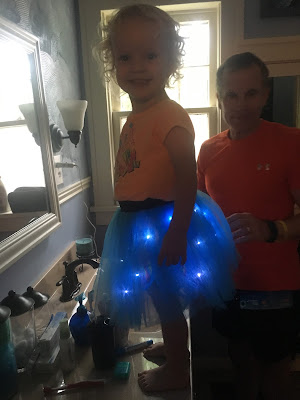 The announcer at the start makes a big deal talking about who is going to win and then tells the kids to run as fast as they can from the start which always gets Carter off the start too quickly. He was again determined not to run with me. He wanted me there but way behind him. His exact words were, "I want you to run behind me. I want you way behind me." Okay, then. Carter took off super fast and was way ahead of me. I looked down and saw I was running 8:55 pace and I could barely see him. About 200 meters or so into the race he looked back and saw me and then started walking. I caught up to him and he told me his heart was hurting. I asked him to show me. He put his hand more toward where you would get a side stitch. I told him to just keep walking for a while to catch his breath, he probably just went out to fast and was having a hard time breathing. He tried running again multiple times and said it was still hurting. He said, "I'm definitely not going to win now." Thanks silly announcer for making such a big deal out of that, he'd never cared before! Then he looked back and saw Elise behind us so he turned around and ran to her so he could run with her. She loved it and chased after him for a long time even after he got quite a ways ahead of her.
It was a rough race for Carter. Once his side stitch went away he was able to run the rest of the way and didn't seem to have anymore pain but then with less than a quarter of a mile to go he told me he needed to poop. He picked up the pace and ran as fast as he could to the finish. Once we crossed the line we immediately headed for the porta potties. Just like the past 2 races we ran out to Elise to finish with her. Mom was carrying her and said Elise told her she couldn't run because her belly was too full. I ended up taking her and running her in to the finish with mom and Carter. I'd say the heavy lunch made the race rougher for the kids and going out too fast really hurt Carter. He finished in 12:47. It was over a mile with him running back to Elise to run with her but even considering that it was significantly slower than both of his previous races. It just goes to show how bad it is to go out too fast in a race no matter what the distance! 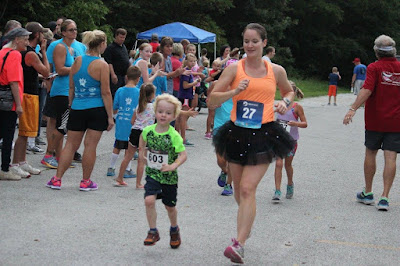 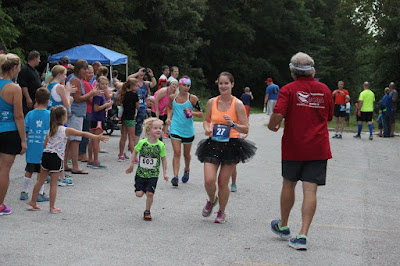 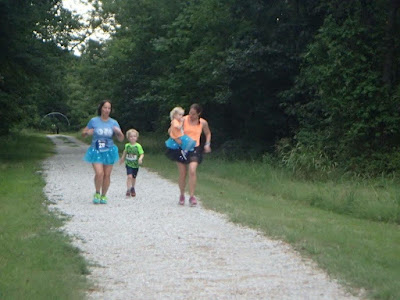 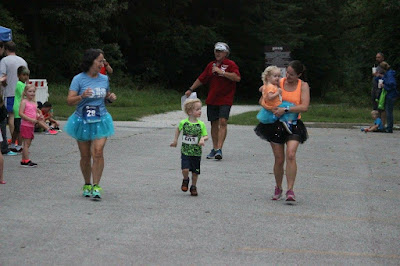 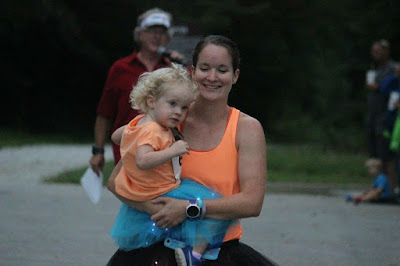 Even though both kids didn't enjoy the mile as much as they had the past two times, they still loved the ice cream. I safety pinned the waistband of my extra light up tutu for Elise so she could wear it and she absolutely loved that! I was worried Carter would be super disappointed this was the last race of the series because he enjoyed them so much and would ask when our next race was in between races. But the side stitch definitely kept him from being disappointed. The only thing he's said since the race is that he doesn't ever want to run that fast again (meaning at the start of the race) because it made his heart hurt. 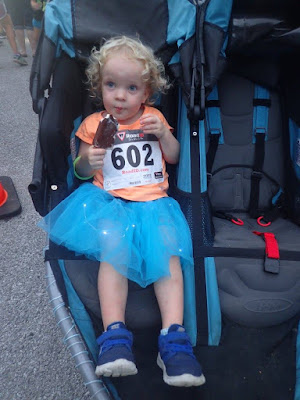 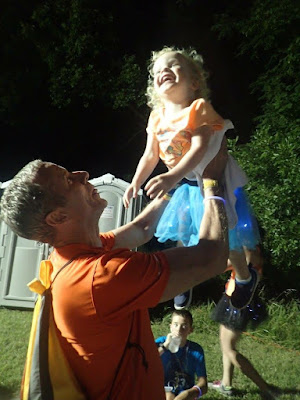