Going into our last of 3 races in the summer running series we do, I was really excited. I ran a 7 mile tempo in 7:17 pace pretty easily, starting off at 7:30 pace to be conservative since my previous tempo run hadn't gone very well. I felt strong and felt as though I could have maintained 7:15 pace had I started there and possibly sped up a bit at the end. My race at the Starry Night 10k in June went really well. I started off conservatively and felt really strong as I sped up in the second half. I definitely wanted to take that same approach this time around. My goal was to go out around 7:15-7:20 pace for the first half of the race and then see how much I could speed up on the way back. Since I'd ran a time in June equivalent to what I ran at this race last August I felt confident I could run much faster this time around. I averaged 7:16 pace in June so I figured I could be under that this time for sure. The first mile goes out fast since there's a long, although slight, incline for pretty much the first half mile of the race. I planned to run the first mile in 7:15 and then go from there. 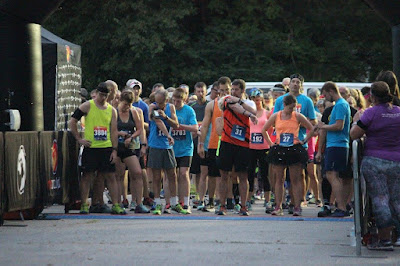 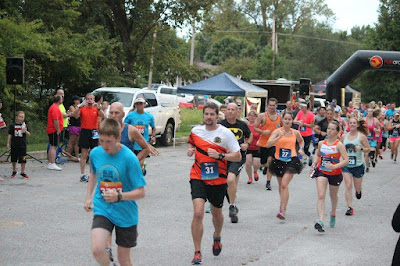 We took off at the start and I felt strong. I felt like I was right where I needed to be pace wise and I moved into first female within the first quarter mile. Then I looked down at my Garmin and it showed I was running 7:40 pace. I immediately panicked and sped up. I told myself that's why I felt to strong and comfortable, I was running way too slow. I continued to pick up the pace in an attempt to get down to the 7:15-7:20 range I'd been hoping for. Each time I looked at my watch it was showing somewhere in the 7:35-7:40 range. I started to really panic thinking something was wrong with me that this pace felt so fast. It was beginning to feel like a pace I wouldn't be able to maintain for the entire 6.2 miles of the race. For whatever reason I never listened to my body and how fast it felt. I continued to believe my Garmin. I passed Jeremy and he yelled out that we were running low 6:00 pace. I looked at my Garmin which had finally dropped down to 7:30 pace and threw my arms up in frustration. I didn't realize that Jeremy has his Garmin set to show time and distance rather than pace so he was calculating our pace based off our time and how far we'd run. I didn't realize that until after the race. When my watch beeped for my first mile split of 6:55, I tried to talk myself into that being okay. I told myself sure it was 20-25 seconds faster than I'd hoped but was sub-7 minute pace really out of the question?

Instead of at that point figuring my Garmin was worthless at determining pace for me during this run, I continued to use it. I figured it just took it a while to catch up with me and would be correct during the second mile. After such a fast first mile my legs were feeling a little trashed and I was having a hard time determining what felt right so I focused on the pace showing on my Garmin during the 2nd mile even more than the first. Each time I looked at it I was reassured I was in a perfect place for me, sitting right at 7:15 pace. When my watch showed my 2nd mile was 7:29 I was so discouraged. I knew there was no use even looking at my pace on my Garmin anymore so I didn't. I tried to run based on feel and attempted not to look at my watch. It was hard though since I had been running completely alone since 1.5 miles into the race. I could barely even see the person in front of me. Mile 3 was fairly steady but still over pace with a 7:25 third mile. I could tell it was going to be difficult to salvage a decent race out of the situation as my legs were already feeling dead. I was just trying to hold it together as best I could. When I did sneak a look at my Garmin a few times, it showed I was running 8 minute pace and I almost cried. This was turning into one of the most frustrating races I've had in a long time. My legs were dead, my Garmin was worthless, and I was alone in almost complete darkness. I couldn't run based on feel because my legs were dead so the pace felt much faster than it actually was. Mile 4 was 7:37. At that point I thought about giving in. At the turn around point I saw how far the 2nd place female was behind me and I knew I had a huge lead. But the fighter in my kept going. I told myself if I really pushed the last 2 miles there was a chance I could still run close to my time from June. And even if I didn't, why waste a tempo effort by slogging in the last 2 miles. My legs were dead, but I was still somewhat mentally tough and really the only silver lining of this race was that I didn't give in.

A little bit before the 4.5 mile mark I crossed a road and I could see a shadow bobbing along behind me in the light of the police car's headlights. I kept thinking, please let it be Jeremy, please let it be Jeremy. As Jeremy pulled beside me to pass me I told myself, here he is. This is what you need. Let Jeremy carry you to the finish line. I told myself I needed to stay where I could see him. I needed to try to go with him as much as I could. That helped me pull my time down for my 5th mile which I ran in 7:19. I passed mom finishing the 5k and she cheered for me which I enjoyed. With about 3/4 of a mile to go we hit the bridge we cross and it started getting really dark. It was dark enough I couldn't see Jeremy anymore. Once I lost sight of him it was harder not to fade, especially because I had hit the slow incline to the finish. At that point my legs were burning and I told myself it didn't matter what I ran this portion of the race in as long as I gave it my all. I was passing a lot of 5k runners and felt like they were impeding me more than what I experienced in June. One lady went out to pass someone and slammed right into me. With my dead, rubbery feeling legs I swayed and almost went down. I just kept pushing on, one foot in front of the other. As I neared the finish line and attempted to kick it in I felt like I was barely passing the 5k runners rather than blowing by them like I should have been. It wasn't until I neared the pavement for the finishing kick that it dawned on me I may not even break 46 minutes. As the clock came into view I saw that I most definitely wouldn't. As I crossed the finish line I was so exhausted, so spent, so emotionally drained, I just wanted to cry. It was that terrible feeling of putting my all into a race, giving it everything I had, but having a spectacularly bad race. There's nothing like fighting through lactic acid and fatigue only to run almost a minute slower than planned. It's a big bummer! I was able to pull out 6:58 pace for the last 0.2 of the race so I was proud of doing that on dead legs! 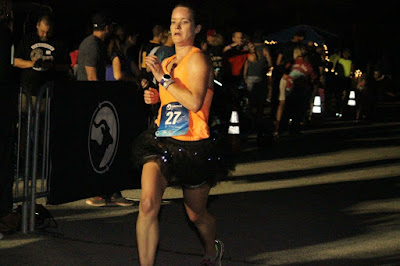 I watched mom finish and then headed out for my cool down. My legs were so tired I actually had to walk for a while because I physically couldn't run. When I finally did start running it took me 12 minutes and 21 seconds to run my mile cool down! It was insane. Almost the entire mile of my cool down I wanted to cry. I just couldn't get over how badly I had crashed and burned. It's not often that my wheels fall off in a race but in this one they fell completely off. I tried to focus on the fact that I was able to hold it together enough to finish at 7:24 pace but I couldn't stop thinking about how my time of 46:05 was over 40 seconds slower than what I'd run in June! It was a huge bummer and I couldn't help it. I lamented my terrible race so much on the drive home that Carter finally told me, "Mommy, we shouldn't have let you run tonight." When he said that I realized I needed to tone it down and work through my feelings. If I was going to have a bad race this was the time to have it. I haven't started the bulk of my training and I'm not into my goal season. I wasn't going for a PR or a certain time, just hoped to run a faster time than June and get in a solid tempo performance. My dad told me it was impressive I could hold it together when my legs were so full of lactic acid and he made me feel better. I thought of it as running a 5 mile tempo after doing a mile of speed work. Who would ever do that!? I thought back to when my coach asked me to do a mile time trial and then 4x800 repeats afterward. My legs were dead during the 800 repeats and I had a hard time finishing them. This was somewhat similar. Although my body failed me, my mind didn't. For as much as my legs wanted to give in, my mind wouldn't let it happen. It's good to know I have that toughness and determination still, even after the spring season I had. I still have that fighter spirit.

Although the kids and I didn't have good races, everyone else did. I find it kind of ironic that I told Carter his race didn't go well because he went out too fast and then I went out too fast (although inadvertently) and died during my race! Jeremy killed the 10k running over a minute faster than last month, finishing in 45:12 which put him 4th out of 77 overall and 2nd in his age group. My disappointing 46:05 still put me 5th overall and 1st female. In the 5k Thomas finished in 22:13, winning his age group and finishing 28th out of 308 total finishers. Dad finished in 23:51 to finish 1st in his age group and 43rd overall. Ty ran an awesome time pushing the double stroller, finishing in 26:05 for 71st overall and 8th in his age group. I'm excited to see what he can run in a race without the stroller! Mom finished in 34:43, good for 3rd in her age group and 186th overall. My lesson from this race was to not rely on my Garmin so much and on this course to set it to show distance and overall time instead of pace. I guess all the tree coverage on the trail keeps my Garmin from getting a good reading. I've always had trouble at this race but never this badly! 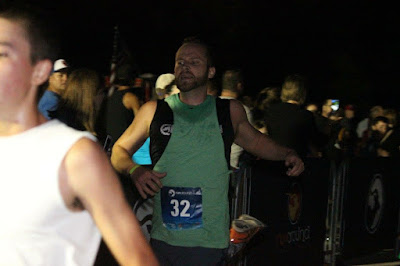 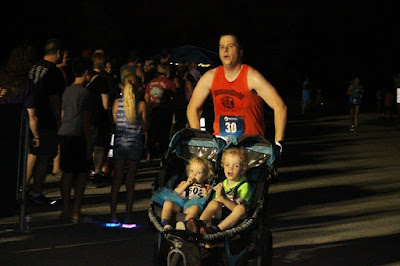 Posted by Liz Runningmomma at 1:49 PM