Now that Elise is talking a lot more and some of the funny stuff is coming from her, I felt it was time to change the title of these posts over from "Funny Stuff Carter Says". I will segment the post into funny stuff Carter says and then funny stuff Elise says so I don't have to type who said each thing. I have a feeling most of the funny stuff down the line will be conversations between them and I'll add those in between. My favorite thing about Elise's stage in language development right now is that she wants to be a part of our conversations but doesn't always understand what we're talking about or what is going on so she'll just yell a string of a bunch of words she knows. For example, at dinner Ty and I were talking and Elise yelled out, "Mommy, daddy, sockies, shoooooes!" We both started cracking up so she just kept doing it over and over. She is just so darn adorable! I keep a note on my phone called funny stuff where as things are happening, I can quickly type them up. I hadn't updated this post in quite a while and was so bummed when Elise threw my phone in the toilet because I lost all the funny stuff the kids had said recently. Most of this is funny stuff I had typed up a while ago and a few are recent things I remembered.

Elise: Coc! (trying to say milk)
Carter: Elise, I have to tell you something important. Cockroaches are really dangerous. Mommy, remember that time there were cockroaches in the box when daddy and I were working?!

"I'm going to Mexico to get warm." after he had climbed into his toy tractor in the backyard.

"Mom, I accidentally made a hand sandwich!" 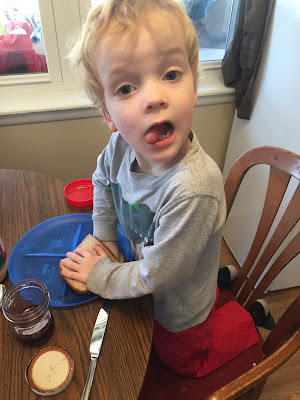 One Carter says a lot now and cracks me up every time, "Mommy, Elise is getting into mischief!" When he tells me that I typically find her on a counter or putting something in her hair!

While playing "little kids" Carter decided Elise would be the grandma. He told her, "You can be the grandma and know what you get to do? You get to knit us new hats to wear! Won't that be so fun!?"

Elise pooped in the ball pit so Ty had the balls in the bathtub soaking in soap. Carter wandered off while Ty was in the kitchen so Ty called him back in to see what he was up to.
"Just haning out, eating marshmallows, looking for poop in the bathtub."

"Did she squish her bladder?!"

While standing in line at the store Carter struck up a conversation with a man in front of us.
"My daddy got his penis cut up so he won't have any more kids."

I explained where daddy was cut for his vasectomy after that incident so then days later Carter randomly said, "I'm really sorry for daddy that he has a sore testicle!"

"Daddy you have a noromous head."

"I do it, I self!" Elise wanted to strap her carseat buckle by herself!

Elise was sitting in my lap so I had my arm around her. Then she yelled, "Let go of me!"

I asked Elise to throw away some trash I found on the floor. She said, "No, I want mommy do that!"

I was rocking Elise before laying her down in bed. She said, "Okay, I be right back." Then she slid off my lap and walked over to pick up a stuffed animal before coming back over.

Posted by Liz Runningmomma at 12:24 PM