This morning was Carter's open house for preschool. His first day of school is on Tuesday. I found myself feeling oddly nervous, I think because I so badly wanted him to be excited and like his teachers and class. Of course, I didn't show Carter I was nervous and spent the morning talking up how excited I was and reminding him of what he'd seen when we toured the preschool before registering him. Ty was able to leave work for a little bit so he could meet us to see the classroom and meet Carter's teachers which was really nice. Upon arrival I found a sign on the door with class lists. Carter is in the dolphin class with two teachers. While waiting in line there was a boy in front of us crying which caught me off guard and made me feel teary myself. I think it made Carter nervous as he switched to standing on my foot. We got checked in and then headed back to Carter's classroom. When we walked in the room I immediately recognized one of his teachers. It took me a moment to figure out where I knew her from, but I eventually realized she had subbed for my co-teacher a couple times back when I was teaching. It made me feel good that I already knew one of his teachers and found her to be very sweet and natural with kids.

Carter immediately took off to play when we walked in the room. His teachers had centers set up for the kids to explore. There was a block center, a pizza making pretend play center, a kitchen along with baby dolls and a bed, and a craft. Carter got to pick a cubby to use for his backpack which was hard to get him to do as we had to pull him away from the centers. Elise made a game of running from the room and looking back to make sure daddy was chasing her. On the sheet they had us fill out, I listed that Carter has been working on using his words to solve problems rather than hitting. I'm hopeful that since they are aware they can watch him carefully and nip any physical behavior in the bud. Before we headed out, we had to stop to play in the big indoor play area with a giant slide. After meeting Carter's teachers and seeing his classroom I'm feeling so much more at ease with what is to come on Tuesday. I can tell Carter is too. Talking about school after the open house was totally different than before. He was no longer worried about "being alone" without me, Elise, or daddy there. Instead he talked excitedly about his new friends. I am bracing myself for tears on Tuesday. If other kids are crying, I'm afraid he will follow suit. I just need to hold mine in until I get to the car. Then I can go home and snuggle Elise until she wriggles out of my arms while clawing my face and acting as though I have greatly offended her in some way by loving her too much. In situations like that I wonder why my snuggly one had to be my first born. Woe is me, but I will survive! Carter picked out which of his backpacks he wants to use for school and was so proud putting it on and wearing it. My heart melted when I saw his big boy smile as I showed him what we will be putting in his backpack. And so it begins, my boy starts school! 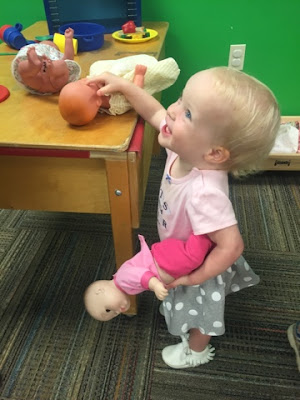 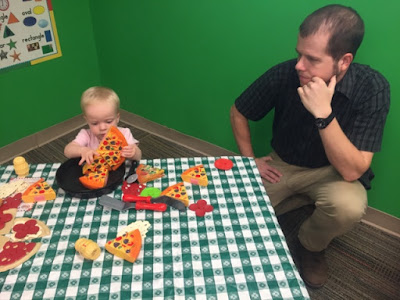 Posted by Liz Runningmomma at 7:01 PM