You guys, I can't even begin to describe the excitement I am feeling right now! This morning at physical therapy Jeremy not only did the elliptical like he has been lately, he also ran a little bit! Jeremy was able to run down the hall at a little over 4 months post-injury. When I got the text from him that read "I ran a little this morning," my heart jumped and I couldn't believe my eyes. What an amazing accomplishment. His orthopedic surgeon guessed it would be a year before Jeremy was running again and the neurosurgeon was hesitant to even discuss him running again as he was unsure what Jeremy's outcome would be from the brain trauma he endured. Jeremy's head injuries were so extensive and his brain bleeding so severe that they were unable to perform surgery on his femur for nearly a month as his intercranial pressures were not stable enough for him to survive surgery until that point. Due to such a long delay before surgery, there was concern over how well his leg would heal and what it would mean for not just his running future, but his walking and every day life future. There is absolutely no way I would have believed it if you had told me even just a month ago that my favorite running buddy would be taking his first running steps so soon. Two months ago he was returning from rehabilitation. Three months ago he was just coming out of a coma and his physical therapy was being moved from his bed into a chair with the use of a lift. Four months ago we were unsure he would survive. What an amazing ride it has been and what amazing progress he has been able to make!

Someone told my parents the best indicator of a TBI patient's outcome is family support. While that seems crazy to hear as you would think the extent of brain damage would be the number one indication of how much will be regained, I am definitely realizing that is the case. The support my parents have shown Jeremy has been unwavering and unending. They have put everything on hold to be there for him every step of the way. They have been a united front fighting his battles when he was unable. Forcing him back into bed when he was too confused to understand his leg was broken, reminding nurses of proper procedures, never giving up. Someone slept with him every single night as he was in the hospital fighting for his life and my parents have continued doing so ever since. They have been an example of what unconditional and unselfish love is. Every morning my mom made him protein pancakes and every evening a milkshake with protein. He has been able to get back up to his original body weight which means in the past few months he has nearly doubled his weight! All the protein has also helped with muscle re-growth. That plus the fact that we were all doing physical therapy with him even when he was still in a coma through range of motion activities, most notably my mom, and the constant watch my dad kept on him to ensure he didn't misuse his leg so it could heal properly have all lead to such an amazing outcome for Jeremy. The best part of all this is knowing that it is still early. As his doctor said, we are still in the early stages of recovery from a TBI. And look where he already is! We are so thankful for all the support from so many people who have helped Jeremy get where he is, I'm so pleased the miracles keep on coming! And so are Carter and Elise. When Jeremy first returned home Carter was elated to see his Uncie J, but also hesitant. He was so worried about hurting him, he was afraid to hug him. He would put his arms around Jeremy, but hovering just about an inch away from Jeremy's body in fear he may hurt his Uncie J. I noticed yesterday when Carter hugged Jeremy he not only rested his arms on Jeremy, he patted his back with his hands. I know he is so happy to have his Uncie J back and so strong already! 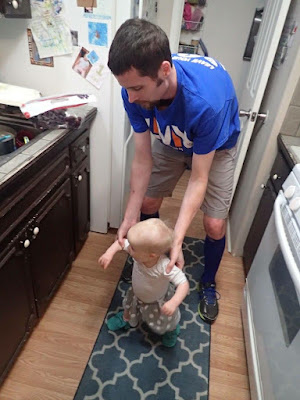 Posted by Liz Runningmomma at 7:13 PM