Miracle Man Goes for a Run

This morning Carter, Elise, Harper and I took off for what would have appeared to be a typical run. Carter and Elise were strapped into the double stroller with blankets covering them and peeled Halos in their laps. Harper's leash was securely attached to the stroller so I could run with one hand free. We took off and ran a regular route from our house. But then we went back by our house at a little over a mile and headed toward Jeremy's house. That's when our run took a turn toward exciting.

Dad was waiting for us by Jeremy's house and Carter hopped out of the stroller to run with his Opa around the block. As we neared Jeremy's house mom called me to say Jeremy wanted to run with us. When we came up by his house again he was outside waiting and took off running with us. It was amazing to see him running along. Carter was the cutest telling Jeremy things like, "Come on Uncie J, you can do it!" and "I know it's hard sometimes. You just have to keep trying!" We ran/walked nearly a quarter mile and Jeremy even kicked it in to the finish. 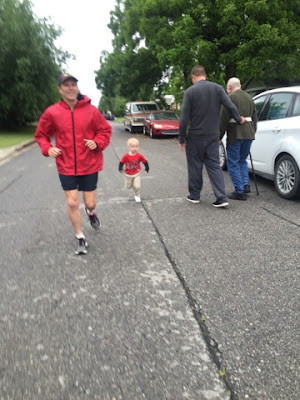 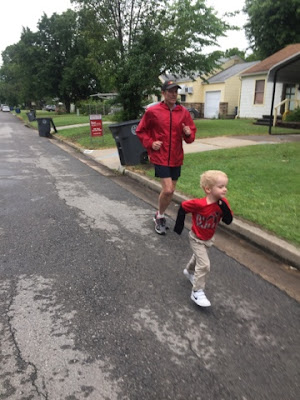 I could tell Jeremy's body was sore, but it felt good in his soul. Running is such a part of who he is and has brought him so much joy and satisfaction through the years. It is wonderful to know his running journey didn't end in January. It is just beginning again, fresh and new with added challenges and obstacles which will make each achievement even more meaningful and rewarding. I can't believe we are already here. I thought the earliest I would be running with Jeremy would be January 2017, not under 5 months post-injury and even less time since surgery! We may have looked a little crazy with a toddler running along with his uncle beside him, Opa behind him, and mommy pushing a double stroller with only one child strapped in while taking pictures and videos, but we sure enjoyed ourselves. I'm already looking forward to my next run with the Miracle Man! What an inspiration! He could use his injury as a crutch and just sit around not doing anything. Instead he's pushing his limits and challenging his body. There is just no way for me to describe how incredibly proud I am of him!
Posted by Liz Runningmomma at 1:34 PM