I ran my first 5k after Elise was born just shy of one month postpartum. It was a little much and I needed a couple weeks of easy running to recover. Once I felt like my body was ready I was back at it, pushing a little bit harder each week and eventually adding in some quarter-mile repeats to a run once a week. My mom had signed us all up for a summer running series in a town about 30 minutes from them which consisted of 3 races over the summer, one each month starting in June. This past Saturday being the first one. I was excited for the race knowing I was able to hit 7:20-7:30 pace for my quarter-mile repeats without the stroller and even hit that pace for a few repeats, but never an entire workout, with the double stroller.

My goal was to beat my time from my last 5k which was 24:27 and I was hoping to possibly sneak under 24 minutes. Ty had his sights set on another PR which meant under 24:12. As we lined up for the race I found Ty and stood next to him. I asked him what pace he planned to take off in and he said whatever felt right. He asked me the same. My plan was to run what felt comfortable, not slower than 7:40. The disadvantage of running with the double stroller and then without it is that I feel so good without it I tend to go out too fast which was what happened to me again. Ty and I took off running together and talking for about the first half mile and then he slowly backed off the pace and fell behind me. I hit the first mile in 7:29. We were impressed to see something new the race organizers had added, glowing archways spread out along the course. 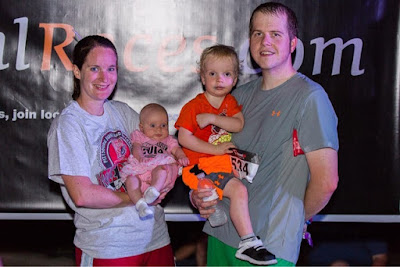 I knew I had faded quite a bit during the 2nd mile in my last 5k and ran it in 8:11. So my goal was to be under 8:11 in my 2nd mile. The 2nd mile is where I can start to feel how out of shape I am and that I have a ways to go before I'm at my regular form. My legs start to feel like Jell-O. Aerobically I'm doing fine, my body just can't quite keep up and do what I'm asking of it. I knew I was slowing down and significantly because everyone around me was. I was still passing runners and then hit a point where there was decent sized gap between me and the guy in front of me. The top runners had made it to the turn around and were running back past us. I was counting them so I could tell Jeremy how he fared. Then I could see the cone for the turn around in the distance but I hadn't seen Jeremy yet. I assumed I'd just missed him somehow. We hit the turn around and I saw that Ty was right behind me. I was surprised because in the past when he was running with me and fell off pace he just gave up and lost a lot of distance on me. I could tell he was using me and pacing off of me. I started picking up the pace in the 2nd half in hopes of hitting under 8 minutes for the mile. My watch beeped for mile 2 and I saw it was 7:58.

I was pleased with my 2nd mile and started picking it up for the next mile. I wanted to get it back down as close to the 7:29 I'd run for the first mile as I could. As I picked up the pace I could see Thomas ahead of me. I was slowly closing in on him until about the last quarter of a mile and then he started to speed up. I could still hear Ty running along behind me and didn't want it to come down to a sprint off between us at the end. I hit mile 3 in 7:33, just 4 seconds slower than my first mile. It was starting to get dark and I looked down at my watch to see I was hitting sub-7:00 pace. When I looked back up we turned a corner and I could see the glowing archway of the finish line in the distance. I sped up and crossed the finish line in 23:33. As I ran through the finish line someone immediately handed me a cold bottle of water. With the temperature hovering around 90 degrees, it was a very welcome exchange.
I looked for Jeremy and couldn't find him. I found Thomas and asked him what happened to Jeremy. He said Jeremy must've accidentally passed the turn around and continued to run with the 10k. We finally saw Jeremy finish in around 26 minutes and he confirmed that was what had happened so he ended up running quite a bit extra before he realized he needed to turn around. I took off on a cool down so I could make it back in time to see my mom finish as she was walking with the stroller. When I made it back over I grabbed a banana and some trail mix before choosing a spot to watch. I was so excited to see a stroller in the distance and knew it was them. Then I realized there was a small figure bobbing along in front of the stroller. It was Carter man who had run almost the entire last mile with his Opa beside him. I got really excited and took off running with them toward the finish. My dad told me not to run under the archway with the pads picking up timing chips so we both went to the side. When Carter realized neither of us were next to him he got scared and immediately turned around and grabbed onto the legs of a friend who had walked with mom. I felt bad but ran to where they came out of the chute and grabbed him up.
Carter was doing great and I was shocked because it was well past his bedtime! I used the slip off my bib to get him an ice cream of his choice. He picked the pink and blue bubble gum flavored ice cream on a stick. He was sweet enough to share with me and was having a blast eating and dancing as we waited for the awards ceremony. We had 3 medalists out of our group and would've had 4 if Jeremy hadn't run extra. Dad won his age group and was 10th out of 283 overall with a time of 22:41. Thomas was next finishing in 23:28, good for 15th overall and 3rd in his age group. I was 3rd overall female, 16th overall, and 1st in my age group. Ty just missed out on an age group medal, being edged out by Thomas. He finished in 23:43, another PR, which put him 18th overall and 4th in his age group. Jeremy even with running extra finished in 26:16 and placed 7th out of 25 in his age group! Mom walked the race with the double stroller and said Elise cried most of the way because she didn't like the dark. Carter would reach up from his side of the stroller and hold her foot in an attempt to calm her.
By the time we made it to my parents' house it was 10:30, 2 and a half hours past Carter's bedtime. We skipped bath time and he went straight to bed, passing out and sleeping hard. I was impressed that all the way till the end of our time at the race Carter was being sweet and having fun. I was afraid once he got tired he would be grumpy. The next race in the series is in about a month, on July 11th. I look forward to continuing to improve my time!
Posted by Liz Runningmomma at 12:11 PM