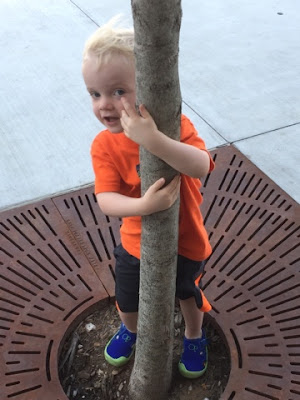 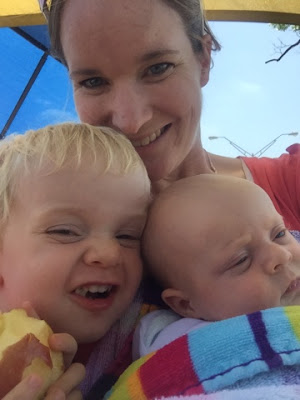 Me: Carter are you an awesome brother?
Carter: No, I Carter Ty Cox!

Carter grabbed my running watch, slapped it on his wrist and yelled, I go run.  Carter go run by self.  Bye momma, lock door!

We were driving in the car and Carter had decided he wanted his Oma and Opa to visit.
Carter: Opa, Oma come, bring 4 dogs (as he shows me 4 fingers).
Me: Oma and Opa just have 3 dogs.  Zuma lives with Uncie Taco now.
Carter: Oh, yes.  Oma, Opa have BeBe (Benny), Bobbie, and Fezzer (Fezzik) as he puts one finger down to show me 3.  Uncie Taco's house have Zuma, Queeners (Quinn).  He shows me 2 fingers.

Carter was playing in the fort with Harper as I stood on the ground holding Elise and rubbing Harper's neck.
Carter: Pet Carter's neck.
Me (not understanding what he said): You want a snack?
Carter: No, pet this.  He pointed at his neck.  Natural born teacher!

Carter has learned that when he gets to the very bottom of his sippy cup if we take the lid off he can drink the last little bit of liquid left.
Carter: (grunting and straining while trying to pull off the lid) Daddy put lid on.  Rrrrrrr.  Too hard!
I don't know how many times he's seen me struggle and strain in an attempt to get the lid off and then I tell him daddy put the lid on too tight and I can't get it off.

Randomly while walking down the hall.
Carter: My friends coming over?

It was naptime and we couldn't find Big Al anywhere.  I flipped the entire house in search of him.
Carter: Daddy knows.  Call him.
He ended up napping without Big Al and gosh darn it if Ty didn't find him when he got home!

Carter: Carter burn Carter's teeth, Carter's tongue?!  After I told him his food was hot.

While sitting at storytime at the park Carter pointed right at my nipple.
Carter: Sissy eat mommy's nipple?
Elise was asleep in her car seat at the time.

While walking Harper she started to walk into someone else's yard.
Carter: Harper, not my house!

We were at a garden doing a scavenger hunt with Carter's friend Walter.
Walter: You know how your mommy takes pictures of you all the time at home?
Carter: Yes.
Walter: My mommy wants to take a picture of us.  Come back over here.
Carter: No.
Walter: Why not?
Carter: No pictures!

We got home from the park and I told Carter we needed to get things ready for dinner. He exclaimed, "Carter help get lunch ready!" Then he ran to the fridge, opened it, and got out the grapes, ranch, and barbecue sauce carefully placing them on the table one at a time.

Carter woke up before 7:00 so Ty had him get in bed with us for a while so he could sleep longer.  He woke up to Carter in his face saying, "Daddy, where's mommy?!"  Ty told him he could feel me, I was right next to him, but Carter kept doing it.  Eventually Ty looked over and saw that Carter had stacked pillows on top of me.

He loves to watch Elise and mimick the faces she makes.  He'll stick his tongue out and roll his eyes around.  I laugh every time!

A friend was coming over to visit one morning.  I usually put Harper outside so she won't bark at visitors and I forgot.  My friend knocked on the door right as Carter was walking down the hall with a bowl of dry Cheerio's.  It scared him and he jumped flinging his arms and spilling Cheerio's all over the floor.  Then I had a hard time getting Harper outside because she wanted to eat the cereal.

Our cat, Skippy, spends most of his day hiding in our master closet.  I guess Carter's figured that out because he's started playing "kitty" by crawling around in our closet and hiding behind our hanging clothes.
Posted by Liz Runningmomma at 11:50 AM