This past weekend I was looking forward to another weekend at home, enjoying family time just the 4 of us. Ty and I both planned to get 7 mile long runs in plus I had signed Carter up for a Wetland Wonders program at our local nature center. I was excited about it but it was scheduled for 9 am so I knew if I wanted to get a long run in beforehand it would have to happen early. Elise woke at 6 am. Once I'd fed her I got dressed and started to head out for my run but as I did I heard Carter quietly calling for me. I got him up, changed his diaper, fed him breakfast, fed the animals, and took him in to lay with Ty a little after 7:10 so I could run. My run went well and I even ran my last mile in 8:30! I got home with about 10 minutes to shower and get dressed. I knew I should have woken Ty up earlier but I wanted to let him sleep as long as possible. Ty dressed the kids while I showered and then we loaded up.

Carter had a blast during the first section of the program. We traveled to 2 different ponds (one had a dock that was under water because it was so full) and a bog. Each child was given a net to explore in the water and find animals. We found lots of mosquito fish which I was tempted to smuggle home for our infested back yard! I loved the man who led our explorations. He was very sweet and calm with the kids as well as extremely knowledgable. He was a volunteer who was retired from the zoo after 30 some years! He took the time to point out animal tracks as we walked, explain animals we found, and discuss the importance of all animals we found. We even saw a 17 year cicada which Carter found fascinating. 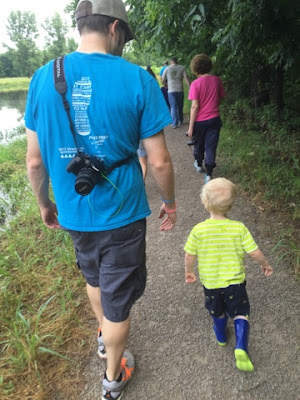 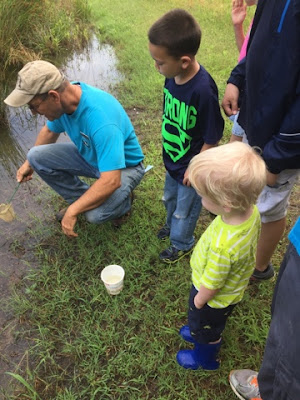 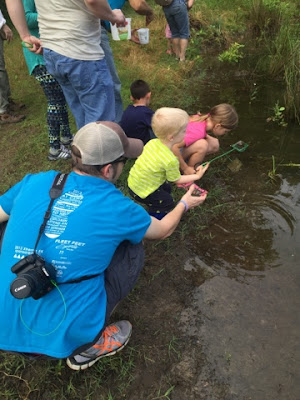 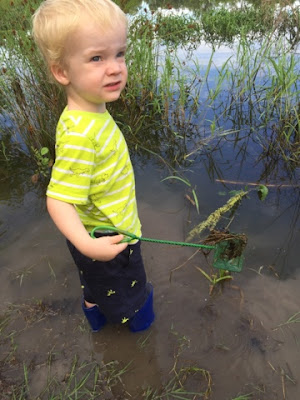 After our walk and discovery time on the grounds we headed inside for crafts. We were given cut out old paper bags to decorate as covers for a nature observation book. Carter loved stamping his with stamps of birds, fish, chipmunks and the like. He was still working on his long after the other children left to do other things. Then it was on to painting using flowers as paintbrushes and feeding fish and turtles from the deck over the water. I was very impressed and look forward to their next program. They do special activities for children the 2nd Saturday of each month and it's free! 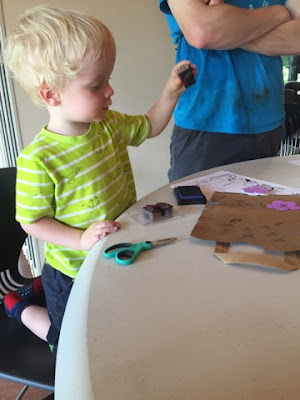 We ate lunch when we got home and then Carter went down for a nap. Ty headed out to get his long run in. I nursed Elise, read for a while and then napped myself. After a 30 minute nap I nursed Elise again, flipping through Facebook on my phone. That's when I saw information posted about the Riverwalk concert series. Each Saturday throughout the summer they host a free concert along with a free children's area that opens at 5:30. When Carter woke up we had time to play and eat before heading out. Carter had a blast blowing bubbles, jumping on inflatables, playing with giant blow up toys, and running through the splash pad. We eventually had to drag him away for his bath and bedtime.
Our excitement the following day was a free event for kids at a park near us, complete with concerts by many children's bands. Carter woke up from his nap not knowing specifics and told me he wanted to see Lucky Diaz. Lucky for him they were the closing act of the evening. When we arrived the lines for the inflatables and face painting were out of control. Carter was content dancing, running around and drawing with sidewalk chalk. Elise woke up hungry so I walked over to a covered area to feed her. I sat down and started feeding her just in time for a torrential downpour to begin. Everyone came rushing in, crowding around us. Carter wanted to stay for Lucky Diaz so we did but 2 songs into their set he was ready to go home. As we were walking back to the car I heard them playing Pretty Princess and was so disappointed as it is Carter's favorite song. He knows all the dance moves and is so adorable dancing along! This weekend we will be in town again which is amazing and we won't be quite as busy. Our only plans are to spoil Ty on Father's Day and I am really looking forward to it!

Posted by Liz Runningmomma at 11:43 AM