So I wasn't sure what to title this post and eventually used the word learning, but at this age I don't really think of it as learning.  I'd say it would be more accurate to call it fostering cognitive development.  A baby at such a young age is naturally going to develop certain abilities most of the time.  I just like to spend time practicing those skills with my baby and watching for them to develop.  Obviously it's always worth working on skills to help develop them, but I feel babies will get there when they are ready with or without intervention most of the time.

When Carter was a baby I started researching different things to do with him to stimulate his mind and foster cognitive development.  My background is in early childhood, but much older, so I didn't have ideas on what to do with him other than talk a lot to immerse him in language.  This time with Elise I have things I did with Carter and have been able to add to that which has been a lot of fun.  Carter wasn't as alert as early on and for as long of periods as Elise was and has been so I've noticed she's more likely to get overstimulated and fuss.  Carter tended to just fall asleep when he'd had too much, so I have to really watch her to make sure I'm not doing too much.

I looked up the baby development stages and found a list of things babies should be starting to do by 3 months here.  Here's what the list looked like:
To encourage her to smile I made sure to stay in her line of vision, smile a lot, and talk to her the whole time.  I also liked to make different faces at her and watch her eyes study my face and what I was doing.  Carter saw me do that a few times and then I'd notice him sitting down by her making faces at her.  It was so cute!  I also liked to put a mirror by her so she could see her face.  She wasn't as into her reflection as Carter was at her age.

We did the obvious tummy time to help her with her neck strength, but she also liked to lift her head and look around when in the baby carrier facing my chest.  So I'd pull back part of the carrier so she could do that for a while and then slip it back to help support her head after I felt she'd had enough time to practice.  Much of her tummy time and floor playtime was on her activity gym with toys hanging down.  I'd show her the toys and swing them around.  I also used them to move back and forth in front of her face so she would track them.  We used Carter's finger puppets to do the same thing and he loved helping me with that.

One of my favorite things to do was to put different objects in her hand or rub her hand across them so she could feel them.  I'd let her feel an object and tell her whether it was smooth or rough, soft or hard. Then Carter helped me sort the items she felt into a soft pile and a hard pile which was good practice for him too.  We also ready "That's Not My Bunny" and I rubbed her hand on the different touch parts so she could feel them.  I also liked to take her outside so she could observe nature and I could put different things in her hand to feel.  And let's be honest, because Carter loves to be outside! I'd also pull her hand across Harper's fur so she could pet her.

I think the most important thing to do with your infant is talk to him/her.  I was constantly talking to Elise or talking to Carter where she could hear me.  I would do simple stuff like tell her what was going on.  I'd explain what we were doing at each step of a diaper change.  I'd also describe to her what Carter was doing (he loved the play-by-play of his actions).

Since babies only see black and white for the first part of their lives I made sure to pick up board books with mostly just black and white pictures for Elise.  I also already had some I bought for Carter when he was a baby.  Elise loved looking at the pictures while I read the words.  I also pulled back out the high contrast cards I had for Carter and taped them where she spent a decent amount of time: on the side of her swing, on the side of her crib, beside the changing table.  It was amazing to watch her look at and study the pictures.  I found the cards free online here and just printed them.

Possibly Carter and my favorite activity was using finger puppets to help her track objects.  We would make the finger puppets talk to her while moving them slowly from one side of her head to the other.  Not only would she move her head to see the puppets, she'd also track them with her eyes. 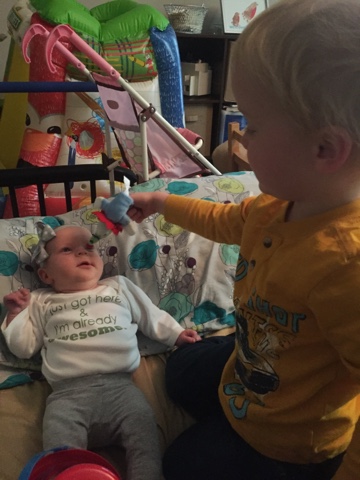 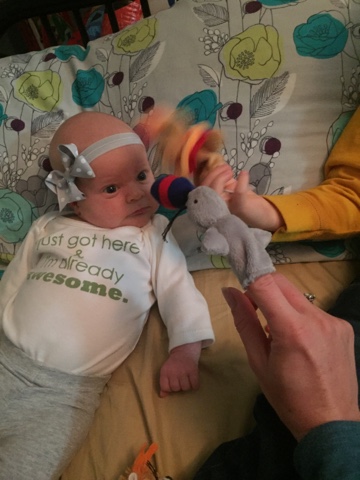 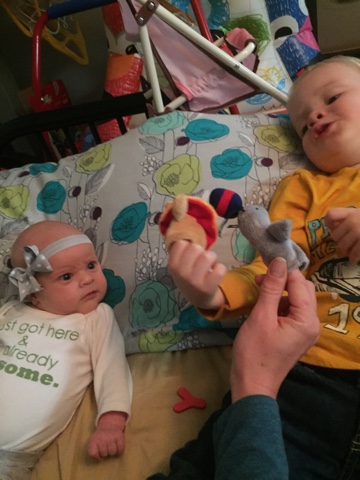 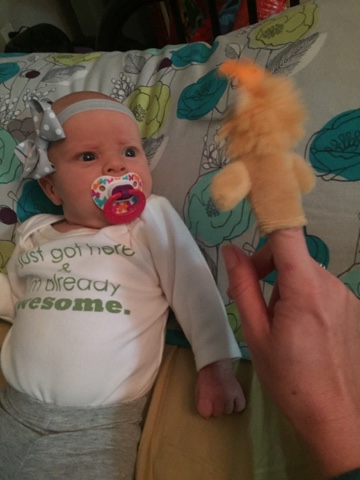 The books we read:
Black and White Ocean by Charles Reasoner
Black on White by Tana Hoban
Checkers and Dot on the Farm by J. Torres and J. Lum
Hello, Animals! by Smriti Prasadam
Hello Baby by Roger Priddy

Posted by Liz Runningmomma at 12:08 PM