We left for Topeka on December 27th to celebrate Christmas with Ty's family. Ty's brother and sister-in-law, Paul and Amanda, made the trip out with their 2 year old, Wyatt, and 4 month old, Kinley. During our drive Carter said he couldn't wait to meet Kinley and see what her face looked like. It would be the first time we'd be meeting her and we were all very excited! He said he already liked Wyatt's face. It was very cute! We arrived a little before dinner on Thursday and enjoyed getting to hang out with everyone. Friday was our family Christmas. We opened presents and then made chocolates. I ended up with a migraine that caused me to miss out on much of the day but I was able to participate in all the festivities. Elise was precious while opening presents. I love how she'll open a present and yell, "Just what I wanted," then follow that up with, "What is it?" She got lots of Hatchimals which delighted her. She also got a Hatchimal board game which was a lot of fun and she was super excited about getting her own headphones. Carter got more Legos which he was quite excited about. The highlight of chocolate making was watching Wyatt. We use paintbrushes to brush the chocolate up the side of the paper. Wyatt thought he was just painting and painted all over his trays with chocolate. It took him quite a while to realize the "paint" was edible. Then he enjoyed eating some as he worked. 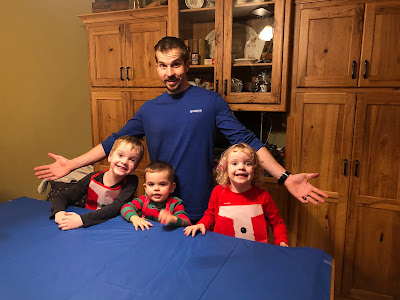 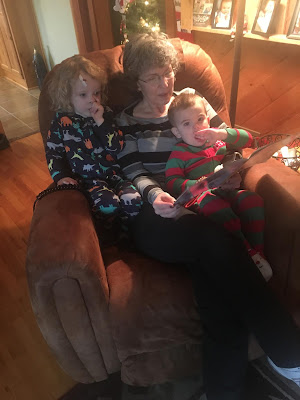 One of the funniest moments of the trip was when Elise held Kinley. She was so excited to hold her and asked if she could. While Kinley was on her lap, she spit up. It didn't get on Elise but it didn't matter, Elise was done. She immediately passed Kinley off. Later when I came in and went to hold Kinley, Elise said, "Mommy she might spit up on you!" When I told her I didn't mind she was slightly amazed and slightly appalled. It was hilarious! I was playing with Kinley lifting her up and making faces at her. Elise informed me I should be careful because Kinley might spit up into my mouth. I told her she had done that to me when she was a baby. Saturday morning we did Christmas with Grandma and Grandpa Shupe which meant delicious cinnamon rolls! Even though it was crazy cold outside the kids wanted to play outside. I took them out and then realized Wyatt didn't have his mittens so I ran back inside to get them while Ty played with the kids. Wyatt saw a stack of wood back by the tree line and wanted to go see the "boat". It was cute! When I got back out with Wyatt's mittens Elise had joined the group and Ty talked the kids into walking through the woods. I wasn't too excited about that because there's no trail so you end up dodging limbs the entire time and I was carrying Wyatt so I had to also protect his face from limbs while ducking under to get through. Paul came out to meet us as we came out and said to Wyatt, "You don't go to Alaska and party with the Eskimos." That made me giggle because I love to get outside and need regular doses of sunshine so I get out in cold weather but I definitely hate the cold! I've gotten better about it as I've gotten older. I think the hardest part of being out in the cold is talking yourself into going out there! 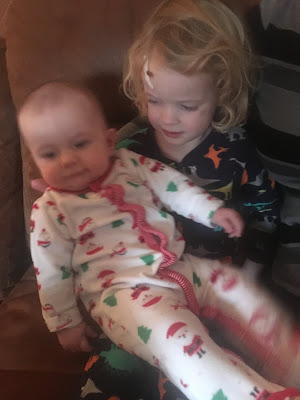 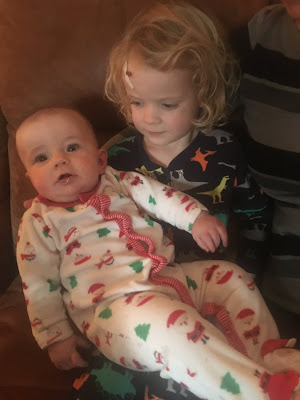 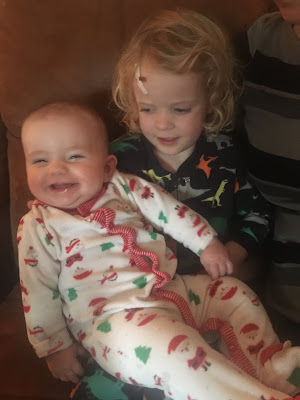 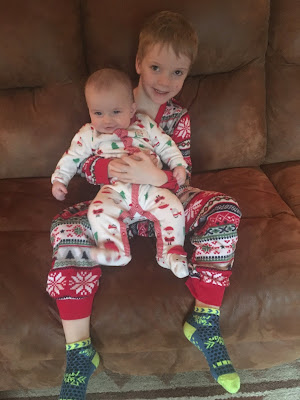 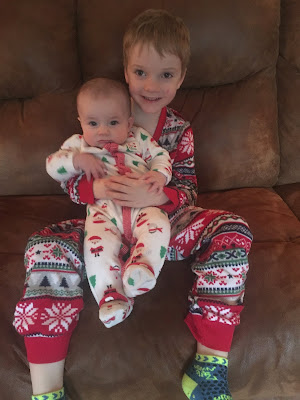 Sunday we had Christmas with Gigi, Papa, Uncle Kelly, and Aunt Tina. That meant more yummy breakfast and more presents. Elise was thrilled to get a telescope from Aunt Tina and Carter was excited to get a gift card from Uncle Kelly. When Elise opened roller skates on Christmas he was bummed because he decided he wanted some. We used the gift card to order him a pair of roller skates and that made him so happy! Elise was so excited about her glittery jacket from Gigi and Papa that she ran to show it to my parents first thing when she saw them on New Year's Eve. I thought that was adorable! Gigi and Papa also got the kids a giant set of markers which were a huge hit. We spent a lot of time coloring in the next couple of days. At one point we were laughing that there were 3 adults coloring and only 2 kids. Later the kids wandered off and Amanda and I stayed coloring. The markers were really a present for everyone! My head was a little off for a few days after my migraine so I really failed at getting pictures on Saturday and Sunday of our festivities. While Elise was napping Carter had lots of energy and was a little wild. It was a pretty day so we decided to get outside. The other days were super cold with the high not even reaching 30 degrees! We walked to the playground and then walked a little further to the hiking trails nearby that run along a creek. Carter had just happened to choose to wear his rain boots which was perfect because he got to stomp around playing in the ice in the creek. We had a blast throwing rocks into the ice and watching them break through. Ty had as much, if not more, fun as Carter! I left my phone at the house for this trip so I didn't get any pictures. 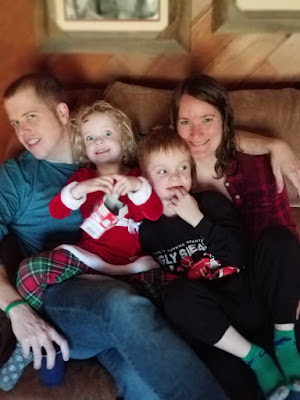 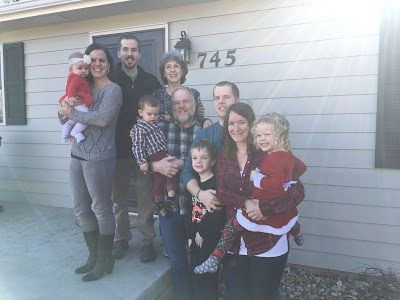 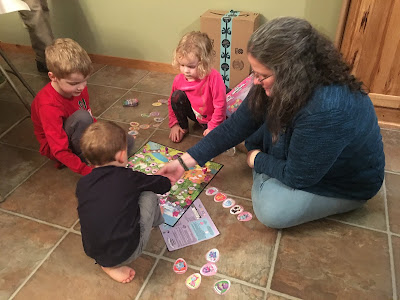 Monday afternoon Paul, Amanda, Wyatt, and Kinley flew back home and we headed home after lunch. During jammy time Gma made a fort for the kids to play in. Carter and Elise were so excited for me to come in and see it. While I was inside Carter told me, "This was all Gma's invention." Which I thought was simply adorable! Later he told me she threw different objects into the tent pretending they were stink bombs and things like that. It sounded like a blast! Carter really wanted to go back to the creek to play in the ice. Gigi had something to give us so we stopped by to get it after breakfast and decided to stop by the creek to play afterward even though it was drizzling rain. We took Wyatt with us and he didn't have rain boots so he didn't get to play in the water but he didn't seem to mind. He was more interested in being held and watching the big kids. He was all about Carter and liked copying everything Carter did. He'd also get so excited when he saw Carter and yell his name. It was so cute. He had a bit of a love/hate relationship with Elise on this trip. He'd play really nicely with her and then suddenly whack her or throw a toy at her. It reminded me of some of the stuff Carter did when he was Wyatt's age. One day when she was napping and he was awake, he ran into the kitchen and screamed, "Elise wake up," multiple times. It was hilarious and I know he loved playing with her. My favorite moment of the day was sitting in the back of the car with Wyatt as we drove to Gigi and Papa's house. We were singing about the rain and he'd close his eyes and really get into the song. Then he started pretending to blow bubbles and pop then. He really is just the sweetest and cutest little guy! Right after they left for the airport I missed him already! 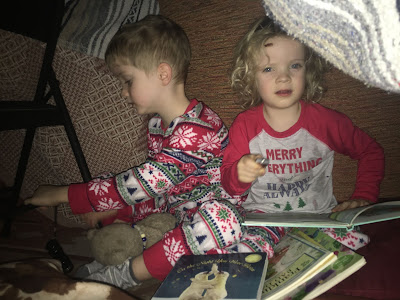 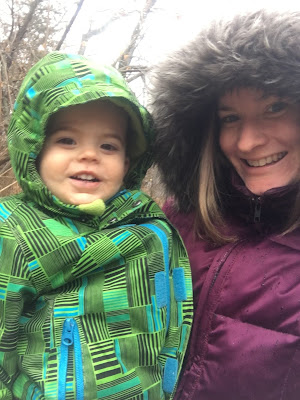 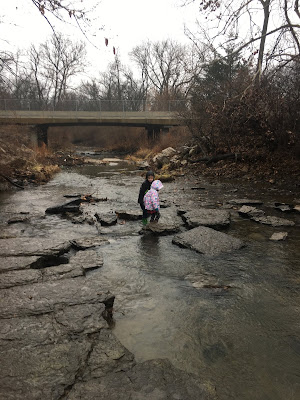 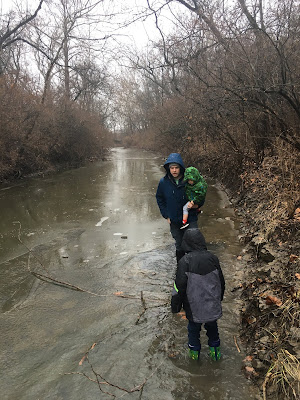 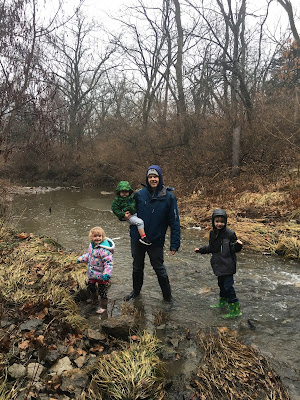 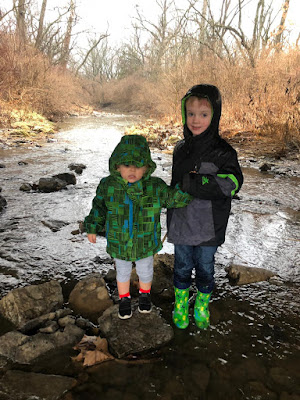 We had such a wonderful trip and are so grateful the kids have so many amazing people in their lives who love them! It's such a special thing that the kids have so many great grandparents who love them that they get a little mixed up about what to call everyone! I was blown away by Wyatt and how much he talks! Part of it is that I hadn't seen him in a while but being around kids his age at the preschool I was also shocked by how much more verbal he was than most of them. His fine motor skills are also amazing! Carter was desperate to open presents on Thursday when we arrived so I told him they could each open a present Ty and I had brought for them. We got these cute Christmas ornament sewing kits where you sewed the two sides together and filled it with stuffing. I helped Wyatt and his attention span was impressive. He sat and worked on it the whole time, granted we made it extra fun by being silly but still! He loved pulling the plastic needle out each time after I pushed it through. The distance between us seems to have gotten harder as he's gotten older. It might be that I'm less tired and busy with my own kids so I feel it more now, I don't know, but man it was hard watching them leave this time in a way it never has been before.

I'm not sure what day these happened or where they fit in, but I want to remember a couple other Wyatt stories. On Thursday I wore a red and black checkered shirt. He had a pair of jammies with that same pattern. One night I took Carter and Elise downstairs to get their jammies and Wyatt came with us. He saw my dirty shirt laying in our dirty clothes pile and said, "Wyatt jammies!" Then he grabbed my shirt and started to take it upstairs thinking he was getting his jammies like the big kids. He was sick and not sleeping well at night during their visit. One night he was fighting getting jammies on so I sang the jammy pokey with him to get his feet and arms in. He loved it and it was so cute how he immediately stopped wiggling around and trying to get away when we turned it into a game. I'm already looking forward to the next time we get to see him! Kinley is the best baby. She is so sweet and happy, always smiling and rarely crying. We loved our time with her as well!
Posted by Liz Runningmomma at 8:22 AM