We had an appointment yesterday for another x-ray on Carter's arm to make sure it was healing appropriately. As we walked in, Carter went right up to the front desk and exclaimed, "Hey guys, I'm back!" He was excited when the woman who came to get us from the waiting room was the same one who took him to get his x-ray last week. He is such a character and loves interacting with everyone. We waited in the cast room after getting his x-ray so we could talk to the doctor before leaving. Elise asked if she could have a sucker and was given the go ahead to pick one out. Carter told everyone what letters were on his sucker. When the doctor came in, he asked Elise what her name was and she responded with, "I'm Owlette!" He said everything looks good and we'll go back in 2 weeks to get the cast off. That means another $50 co-pay. I told Ty Carter's right arm is now worth nearly $200! This has been a very expensive accident but it could have been worse and I'm just thankful it is healing nicely! 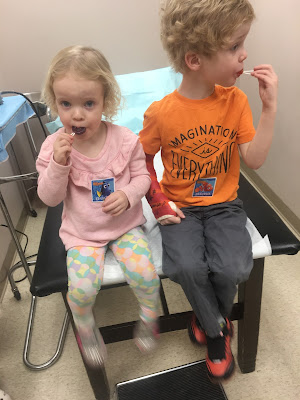 Posted by Liz Runningmomma at 11:09 AM