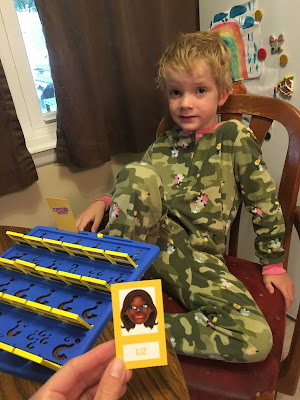 Carter: Guess what my favorite Mother Goose song is.
Me: Tom Thumb?
Carter: The Muffin Man!

"Elise, did you know the Muffin Man gives away muffins for free? And he lives on Journey Lane." -Carter

Elise: I don't like any of my veggies. They are gross.
Carter: Oooh, I love them! Can I have yours?
Elise: No. Then starts eating them herself and loving them.

My mom gave Carter her Game Boy. He calls it his Kid or his Game Kid.

While playing Guess Who...
Elise: Does your person have blue hair?
Me: Which person do you think has blue hair?
Elise points person out.
Me: Carter what color hair do you think this person has?
Carter: Green
"I'm wearing my crock pot shoes!" Elise when she had her crocks on.

"If you give Tesla human food, she's going to get feisty!" -Elise

At church our pastor was talking about self talk and said, "Like right now you may be thinking, 'When is this sermon going to be over,' or 'What am I having for lunch?' or 'I hope I don't fall asleep.'" Elise turned to me and said, "How does he know what I'm saying in my head?!

We were explaining what a brother-in-law is to Carter.
Me: Someday when Elise gets married you will have a brother or sister-in-law.
Elise: No, I'm never getting married! I want to live with mommy and daddy forever!

"I really wanted to sleep in but I was wondering if dad saw a mouse again." -Elise

"I love you more than a hotel, mac and cheese, and fruit snacks!" -Elise

Me: You guys haven't played danger hike in a while.
Carter: Yeah, we had to quit because everyone died.
Me: Wow, that really is a dangerous hike!
Danger hike was a game they played with their Legos.

Carter: I'm starving!
Elise: No, you're not because that means you are dying!

Elise: I'm so proud of myself!
Carter: Why?
Elise: Because I might have a wiggly tooth!

At gymnastics the teacher said, "Smell your feet and tell me what they smell like (while they were stretching)." Elise said, "Mine smell like trash cans!" 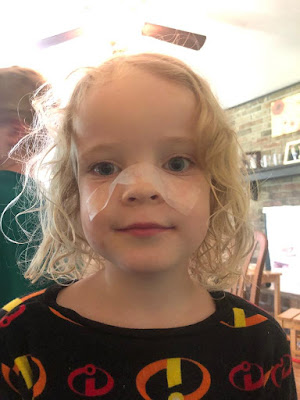 "Mommy, you're a magnet and I'm a nail!" -Carter while he snuggled up to me.

We were driving Carter to school and there had been a fatality crash up ahead. There was a ton of traffic and we were trying to exit the highway and go a different way to get Carter to school. During the duration of our drive Elise asked me a million questions. It was a bit stressful for me. Here's a sampling of all the questions she asked...

"Why does that lady want to be a cat?"

"Can Kyra and Charlee come over after school so we can all play with each agether?"

"I'm still hungry. Can I have a waffle?"

"Why did that lady ding at you and think you didn't have your seatbelt on?"

"Why is there so much traffic?"

"Where is everyone trying to go?"

"Why did those bullies freeze everyone?"

While we were attempting to exit the highway a truck drove across the grass separating the exit from the access road, Elise said, "Why did he do that? Why is it illegal? Why didn't the police stop him? Should he go to jail?"

By the time we got Carter dropped off at school I told Elise I needed some quiet time because I was so frazzled from the stress of trying to get Carter to school on time and all her questions! Luckily Ty called me to tell me traffic was backed up so we left early but Carter had slept in so it was a bit of a crazy rush!
Posted by Liz Runningmomma at 6:50 PM