Elise started her morning off by opening her first day of school book. She was so excited to see which book it was and wanted to read it over and over before breakfast. I didn't have time to read it more than once so she sat and read it by herself while Carter helped me make waffles. Elise wanted to have special waffles for her special breakfast just like Carter did. I figured that would be the case so I got more whipped cream the day before since we were out. Once again the kids were both dressed before Ty left for work so we were able to get a family picture before he left. Elise picked out her outfit all by herself, she would not let me help. Then she got Nutella on her shirt at breakfast but didn't want to change so you'll notice her shirt is dirty in the pictures. In the car Carter was so excited for Elise, telling her all about what 3 year old preschool would be like. The only difference was he went to school half-days when he was 3, but it worked out because our first week of school is half days so it didn't matter that he told her she'd leave before lunch. 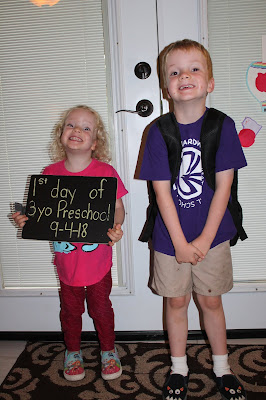 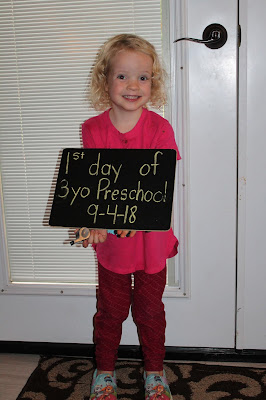 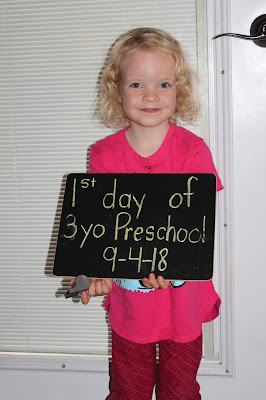 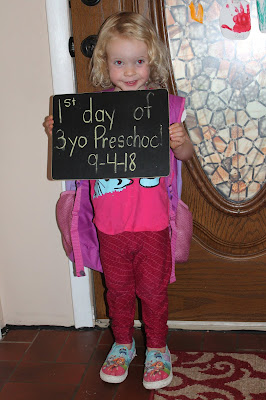 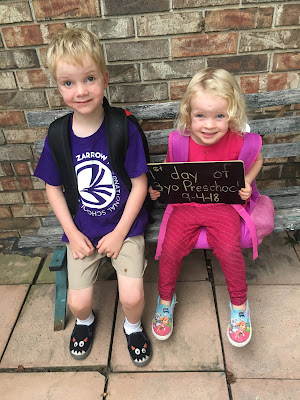 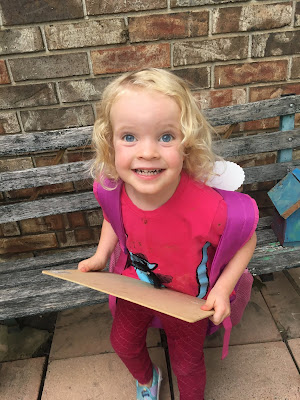 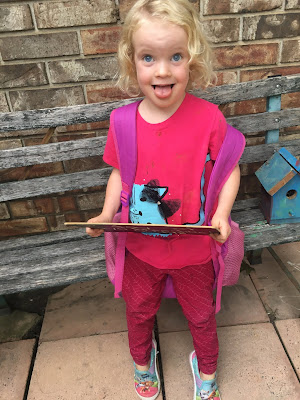 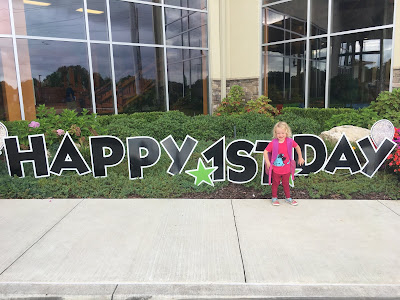 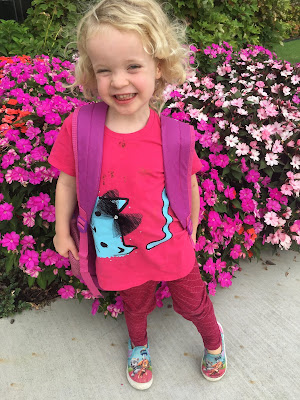 I was a little nervous over how Elise's first day of school would go. She's been having trouble going to her Sunday School class ever since VBS, before that she did wonderfully. At Open House she just stood against the wall and sucked her thumb after Ty left so her teachers brought her to my classroom. This morning we got to school early so I took her to my classroom with me. She played for a while and then said she was ready to go to her class so I took her to the movement room where all the teachers' kids were playing before school started. She went right in with no trouble and had a wonderful day the rest of the day! Her class had recess right after mine so we saw each other as we were going in and they were coming out. I thought she might have a hard time but she just asked me what I was doing and then gave me a hug and a kiss before we went inside! It was so sweet and I loved that I got to see her momentarily. At pick-up she had no interest in staying with her class and wanted to come over with me as my students were dismissed which was fine with me. I was so proud of her and what an awesome day she had. She told me she had fun in her class and her favorite thing was when her teacher read her a story. She described the story, telling me it was about a raccoon who was nervous for school. I knew it was The Kissing Hand which we had also read in our class too. 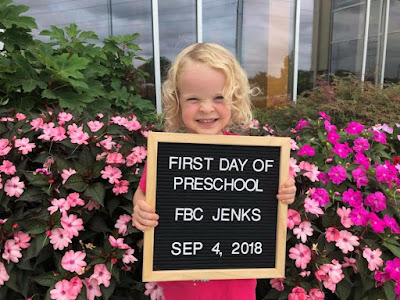 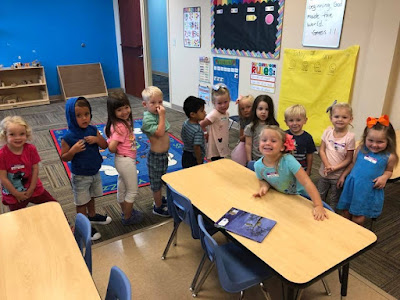 After school we had a picnic out front with lunchables, per Elise's request. She didn't nap but then on the way to pick Carter up she fell asleep. Carter was disappointed she was asleep because he wanted to ask her about her day. He actually tried to wake her up a couple times so he could ask but I got onto him for it. When she woke up, the first thing he said was, "Elise, how was your day?" He wanted to hear all about it. It was just the sweetest thing!
Elise's First Day of School Interview


Posted by Liz Runningmomma at 8:15 PM