This year going into the Corndog Challenge I tried not to get my hopes up about winning megaride passes for Carter and Elise to go to the fair. That's the main reason why I run the race but winning a race is just so unpredictable and out of my control. I can't control who shows up on race day and last year I was 2nd overall in the race only to come in behind a female who also did the challenge so although I beat 2 of the people who won megaride passes, I didn't win anything. It was a bit frustrating and I thought about switching to the classic 5k rather than the challenge this year but everyone else in my family was doing the challenge. I also like doing the challenge because I don't worry about trying to run a fast time due to eating so it takes the pressure of hitting a certain pace off. The race started really advertising as the race day approached and decided to award $250 to one male and one female if they could break the course record. The previous women's course record was posted as 20:40. That's a decent time but there are plenty of women in the area who could best that. I thought they might get some last minute sign ups, just in hopes of winning the prize money. The day before the race my legs felt wonky and as I went to bed I told myself all I can do is run the best race I can and not to worry about the tickets.

I tried to make sure I didn't run any races the weekend after having run a 20 mile long run or longer this training cycle. I did that a couple times last season and the races were a struggle. When I created my schedule I knew that would put me doing a 20 mile long run workout the weekend before the Corndog but since it wasn't a goal race I went ahead with my plan. I did decide to push back my planned tempo run from that Wednesday to the following week in hopes that my legs would recover faster from the 20 miler and I'd be decently fresh for the race. That morning the weather was wonderful in the low 60's. My legs still didn't feel very good on my warm-up and when I decided to throw in a couple strides at the end of my warm-up, I topped out at 6:45 pace. I figured I wasn't going to have a very good race but that was okay because my long run workout was more important for my long term goals than a non-goal race. I stopped at the porta potties again after my warm up. I went out for Mexican with friends the night before and my spinach enchiladas were really more like queso enchiladas with a little spinach mixed in so my stomach was rebelling fairly fiercely. I wasn't sure how eating on the run would go.
I made it to the start line with just minutes to spare and found Jeremy and Thomas. I saw two skinny high school aged girls standing right at the starting line and was disappointed when the faster looking of the 2 was wearing a challenge bib instead of a classic bib. We took off at the start and the race went out super fast. I turned to Jeremy and said "Holy shit!" The girl had blown out to the very front of the pack and Thomas had a nice lead on me. I saw I was running 6:00 minute pace and was losing ground by the second! Jeremy pulled away from me and I settled into a rhythm. I kept my eyes ahead and trained on the girl out in the lead. My only goal was to try to catch her. I passed 3 or 4 other women during the first mile but was really only concerned with the girl I knew was going to be my competition for those megaride passes. Normally the caramel apple slice is just after the mile mark but this year was about 6/10ths of a mile into the race. I got caramel all over my fingers when I grabbed my apple out of the cup so I licked them off when I was finished. The apple always goes down really easily and I always figured it was because it's the first thing we eat but Thomas pointed out that it's juicy so it goes down easier as the corndog/chicken and waffle are dry. I went through the first mile in 6:18 which was much faster than I had expected. I figured if I was able to run around 6:40 pace to sneak under 21 minutes, it would be a good day. I didn't worry about it though, I felt really strong and was hanging decently close to Jeremy.

At the end of the first mile the girl in front had pulled away to a huge lead, but I slowly started catching up to her during the 2nd mile. At some point during the 2nd mile I caught up to Thomas and passed him. By the time we made it to the orange juice/mimosa stop I had whittled her lead down to about 20 seconds. She stopped at the orange juice station to drink her juice before heading on and I told myself that was my chance. I grabbed the orange juice and drank it down as I ran, cutting her lead down a little bit more. That orange juice really got me though and I spent the rest of the way burping up orange juice. I went through the 2nd mile in 6:33 and felt good. I had figured I would have slowed more than that since the first mile was so fast.

During the 3rd mile I was still closing the gap and had it down to about 10 seconds going into the last half mile. Then we hit the chicken and waffle station and I struggled. My mouth was so dry I chewed my first bite for a really long time and couldn't swallow it. I was breathing around my full mouth which made things difficult. Around this time Jeremy passed the girl I was chasing and she went with him. When I saw that I knew I didn't have a chance to catch her. I still pushed it in to the finish as much as I could but by the time my watch beeped for my 3rd mile which I'd run in 6:37, my fighting spirit had pretty much waned. I knew I wouldn't be able to catch her and I was struggling with the waffle. I wanted to finish eating it before I crossed the finish line so I finally swallowed the first bite and threw the rest in my mouth. I got excited as we turned the corner to the finish line and I saw Jeremy and the girl were both finishing in under 20 minutes. I knew I was going to finish way faster than I expected. I was so excited about finishing in 20:15 that the disappointment of not winning tickets for the kids didn't hit me until much later. This early in the season I'd be pleased with a 20:15 in a regular 5k where I didn't eat anything during the race!

Jeremy and I cheered for Thomas who was right behind me. Then we walked a little bit to cheer for dad and headed out onto the course to cheer for mom. Jeremy and I ran toward the finish with her and then dad met up with us. I was on a high from running such a great race while eating food. I was certain I could run well under 20 minutes in a regular 5k, especially because I'd run a 20 mile workout the weekend before! I took off for the rest of my cool down feeling pumped up. Then I saw Carter and Elise jumping in the bounce houses so I ran over to say hi. Carter was super excited to tell me he beat a guy who was really tall in the fun run. It was cute! Ty said Carter had looked up and seen the guy in front of him and had just taken off with his little legs pumping so hard. I loved hearing about his little competitive spirit coming out! 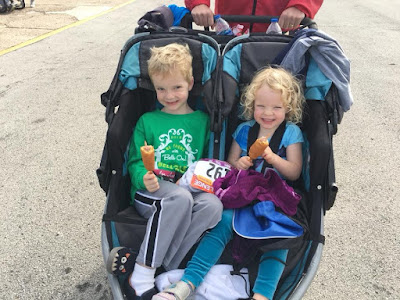 Jeremy finished the challenge 2nd out of 247 overall and 1st in his age group with a time of 19:49. I finished 4th overall, 2nd female, and 1st in my age group in 20:15. Thomas finished in 20:34 which put him 5th overall and 2nd in his age group (behind Jeremy). Dad finished in 24:34, good for 9th overall and 1st in his age group. Mom was 79th overall and 2nd in her age group with a time of 34:48. It was a lot of fun and I was glad I ran even though I didn't win the tickets. I certainly wasn't expecting anything that fast! I thought I had a chance of breaking the 20:40 course record but wasn't sure that was feasible. I sure didn't expect to smash it! It's too bad the girl ahead of me beat the record by more! Mom said next year I need to enter the classic 5k since it has been the less competitive race the past few years. We'll see how that goes for me! I'm not sure that I'd really miss eating all the food during the race. Read about last year's race here and 2016's here.
Posted by Liz Runningmomma at 7:12 PM