Elise: I saw you sleeping with goblin eyes the other day.
Me: Goblin eyes?
Elise: Yes, mommy goblin eyes.

In a public restroom Elise yelled, "Mommy, my pee is quiet!"

Carter: I might be sick, my tummy hurts and I'm really tired.
Elise: My tummy is sick from somebody farting.

Elise was on the phone with Oma and told her, "When Opa comes home you should hide from him because when daddy comes home I hide."

When I opened the car door Elise said, "I think I'm allergic to the sun because I bless youed when you opened the door!"

"My legs don't have so much gas so I can't walk there." -Elise

"I'm going to have 3 babies when I grow up and I'm going to name them Harper, Rainbow, and Nicky." -Elise

Elise: What's a shelter?
Me: It's something you can go inside to be protected from the outside elements like rain, wind, heat, and cold.
Elise: A house is a shelter and a hotel is a really big shelter.
Me: Yes (thinking she totally gets it, awesome!)
Elise: You didn't say a tomato.
Me: Well, I don't think that would work as a shelter for a person, maybe a worm. (Thinking, nevermind she totally didn't get it.)
Elise: No, not the food tomato!
Me: Oh, a tornado! (Realizing she did get it and was saying shelter would protect you from a tornado.)

Carter on the way to school, "Can you turn the hot air so it's not blowing directly into my eyes? It is blowing water out of my eyes."

After her birthday Elise said, "I'm a different number," to pretty much everyone she saw including strangers.

She also said, "I don't have to nap anymore because I'm a new number!"

Ty to Elise after she farted: Did you poop in your pants?
Elise looking confused: I don't feel poop in my pants!

Carter in the car on the way home from school, "Can you turn the hot air all the way on? My knees are going to turn into ice pops!"

Me after Elise handed me a baby and a bottle: Do I need to feed the baby the bottle?
Elise: Or you can feed it out of your belly button. Because that's where mommies feed babies milk from.

Elise's first day in the 4 year old classroom at Sunday School she came back with my name on her art work. I asked her why she had them write Liz on her paper. I was assuming it was because she made it for me. She said, "I was a new number in a new room so I didn't know what to say, so I said Liz." I guess when you turn a different age your name might change too, haha! 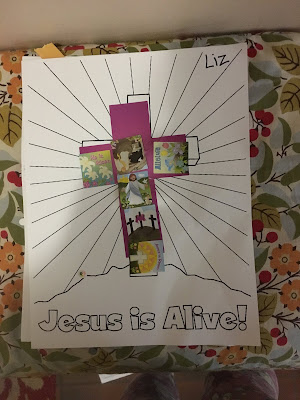 "I wish I could grow more tonsils so I can have a tonsil day again. That was the best day ever." -Carter

Elise: Remember when that kitty was doing tricks?
Me: I'm not sure, were you the kitty?
Elise: No! It was the kitty at Uncie J's house!

Carter: I see a robin over there.
Elise: There's a robber?