Going into the Aquarium Run Half Marathon I was so excited. All my tempo runs during this training cycle were really strong and consistent. I had a 5 mile tempo at 6:48 pace, a 6 mile tempo at 6:45 pace, a 7 mile tempo with some strong winds at 6:48 pace, and an 8 mile tempo at 6:43 pace. Originally I was just hoping to run a PR which would mean 6:55 pace or under, but with how strong my tempo runs were I was really confident I could break 1:30 so that became my goal. Had it not been for those tempo runs, I wouldn't have decided to shoot for that time. In my mind it wasn't whether I was going to break 1:30 or not, it was how much I was going to break 1:30 by. Usually I run faster in races than I do in my tempos, even running extra distance. Even though my 8 mile tempo had felt comfortably hard like a tempo should, it was still pretty relaxed and it wasn't like I was pushing out of my comfort zone, I didn't think anything under 6:45 was realistic. That just seemed too fast! During my taper I ran my last little workout of 2 x 2 mile tempos with a half mile jog between. My first tempo felt pretty good with my miles at 6:46 and 6:51 but my second one was a struggle with my miles at 6:56 and 7:01. That made me a little nervous as it reminded me of what happened leading up to the Prairie Fire Half Marathon in the fall. I kind of bombed that same workout and then ended up with severe glute and hamstring pain following it. I was worried the same thing was going to happen so I stepped up to doing my PT exercises every day. The workout shook my confidence a little bit but I was so sure I would still have a good race with all the awesome tempo runs I'd had! I wasn't as confident I would for sure break 1:30 but I was really confident I'd at least run a PR. I knew last year they had the turn around in the wrong place which added a tenth of a mile to the race so I was a little worried that would happen again. I decided I'd just break 1:30 by enough that it wouldn't matter there was an extra tenth of a mile, I'd still be under! 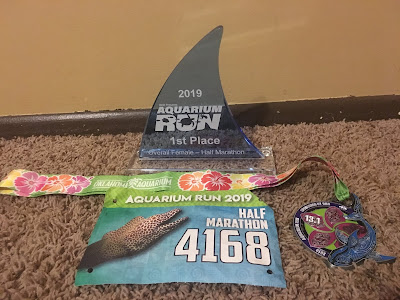 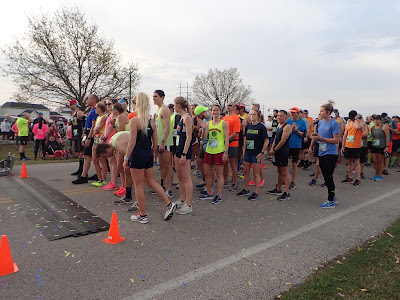 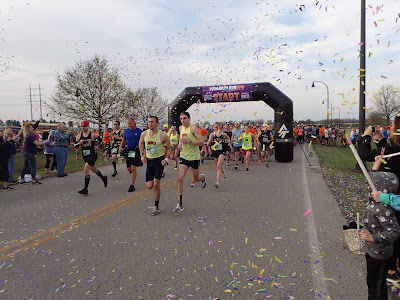 Mile 7 was 6:56 and I hadn't felt like I'd slowed down. I was a little worried I wasn't going to be able to maintain 7:00 pace or under on the way back into the wind after how that mile had felt. We saw the lead guy go by and I was glad to know the turn around was coming up. Although I also knew that meant I would have to run into the wind soon. We had a couple hills in this mile and I told myself not to worry if I fell off pace a bit because miles 7 and 8 were my slowest miles of the race last year. I didn't think about it until after the race, but last year we ran out into the wind and this year we would run back into the wind. The girl who had been running right behind me started falling off pace here and I realized if Jeremy didn't stick with me, I'd be running alone for the final portion of the race. When we approached the turn around there was a group of 6 adults walking and one of them was pushing a stroller. I knew they weren't in the race so I was shocked when they decided to turn around the cones at the turn around and impeded me as I attempted to turn so I had to run out past the cones a little bit before turning around. Jeremy told them there was a race going on and they should watch out as they walked. They were rude to him in return which frustrated me more than them getting in my way. That was a problem with it being warm for the race, there were a lot of people not in the race out using the trails. They apparently didn't notice a race was going on and were getting in our way. That was the first time we had a major issue outside of a group of bikers taking up the entire bike side of the trail and spilling onto the pedestrian side in our way. When we turned around I realized the wind had really picked up in intensity since we started the race. Dad said the wind got stronger throughout the whole race which explains a little bit what was to come.

We hit the 8 mile mark a little bit after the turn around just like we were supposed to and I was very excited the turn around was in the right place this year. I had totally forgotten about the turn earlier in the race where we'd added about a tenth of a mile. I went through mile 8 in 6:59 and was pleased I was still under 7:00 pace. My goal for this half marathon had been for it to be the first half marathon where I ran every mile under 7:00. I've run an average pace under 7:00 many times but I've always had at least 1 mile over 7 minutes so I was excited about that. Jeremy had fallen behind me a little bit during mile 7 but caught back up with me by mile 8 and we continued running together. He tried talking to me and pumping me up a little bit but things were quickly spiraling out of control for me. I realized I couldn't respond to him when he talked to me and was only able to give him a thumbs down when he mentioned how strong the wind was. The wind had definitely picked up during the race and running into it on the way back was killing me. I just kept telling myself, only 4 miles into the wind and then I can turn and have the wind at my side for the last mile. When I went through mile 9 in 7:21 I knew the last portion of the race was going to be a train wreck. I told myself even though sub-1:30 was out the window, a PR wasn't. If I could just hold it to around 7:00 pace I could still pull off a PR.

I just couldn't push my pace down at all and mile 10 was 7:32. I felt myself leaning to the right and I could feel my form going to shit. I couldn't believe the wind was destroying me as much as it was and I was helpless to do anything about what was happening to my race. I gave myself pep talks and told myself no matter what I couldn't give up. Jeremy started to pull away from me and I told myself to go with him, but I couldn't. My body was rebelling. It was one of those situations where I just couldn't get my legs to move. Jeremy told me we were going to have to Prefontaine it and gut it out into the wind. I was pushing as much as I could, but my body was not responding. I felt the grimace on my face and was so close to tears. I had no idea how I was going to be able to run 3 more miles. I tried to be positive and told myself, just a 5k to go. Mentally I was focusing on finishing the race. I knew a PR was no longer possible but I told myself I was a sitting duck for the girl in 2nd and I had to keep pushing. Mile 11 was 7:36 and then mile 12 was 8:09. I was devastated. I couldn't believe I had run a mile during my half marathon that slowly. My slowest mile in my marathon was 8:11 and that was with a monster hill. This was totally flat. I could feel the tears bubbling up in my chest but I would not let myself give up. I told myself, one foot in front of the other. You can do this!
When we finally made it to the bridge where we'd get to turn out of the wind and I knew I had one mile left it looked like it stretched on forever. Imagining this race I had pictured myself hauling across this bridge and sprinting in to the finish for a final mile under 6:40. Here I was just barely moving. Jeremy cheered for me as he turned off the bridge and could see me. I was unable to muster a response. He yelled that there was no one near me but it wouldn't have mattered. If the girl had caught me, I would have had no response to a surge. I kept suppressing the urge to cry because I knew that would only slow me down more. I had lost total control of my form and could tell I was leaning severely to the right. As I neared the finish line I went through mile 13 in 7:56. I saw dad with Carter and bent down to high five Carter. I could hear my mom cheering for me and told myself to pull together a finishing kick for mom but I just didn't have one. I ran the final portion of the race in 7:36 pace. For comparison I finished the last portion of the marathon in 6:50 pace. So it was pretty pitiful. As I crossed the finish line the clock said 1:37 and I was so out of it and knew I'd really bombed the last miles so much, I thought that was right. When I finished I bent over and thought I was going to cry but I didn't. I walked around grimacing for a while sure tears were coming but they never did. I just felt empty. 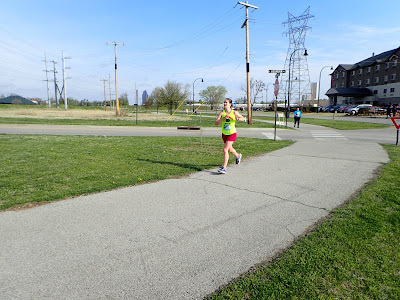