Sunday morning was super cold! All week we had highs in the 50's and 60's. Then Sunday rolled around and the high was 45 degrees and had occurred while we were still sleeping! It got colder throughout the day and was below 30 by the afternoon! Carter and Elise wore their adorable Easter outfits and looked so cute matching. Leina even snuck a bow in Elise's hair which lasted a few minutes before Elise discovered it. I tried to get the kids to take pictures before we left for church but Elise wouldn't cooperate. I was able to get her to pose for a picture before going to children's church by offering for her to choose where to pose. We dropped the kids off in their classrooms and then I saw I had a text from dad that he and mom were at church. We weren't sure if they'd be able to meet us at church so we hadn't said anything to the kids. I had never seen the church so packed. We arrived early and the sanctuary was already full so we sat in the balcony. The balcony filled too and the ushers did a great job of finding people as they came in and leading them to open seats, asking people to scoot down. After church we picked the kids up and the look on Elise's face when she saw her Oma and Opa was priceless! We hadn't intended for it to be a surprise but it sure was a good one! When we picked Carter up he turned and said, "What are you guys doing here?" Such a different response! We took some pictures with the cute photo set up before heading out. 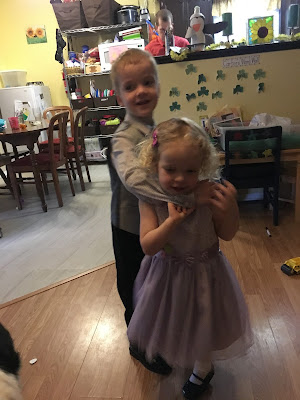 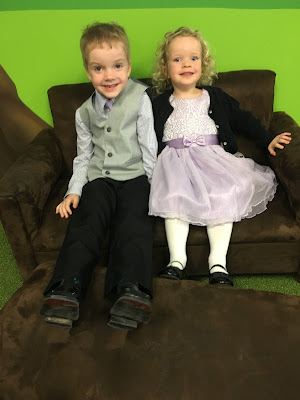 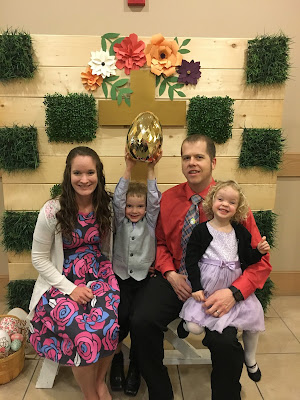 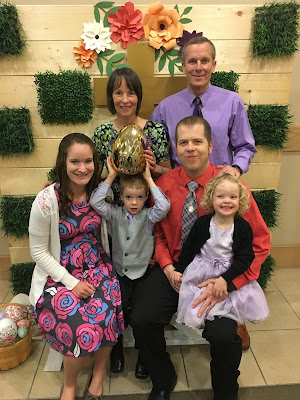 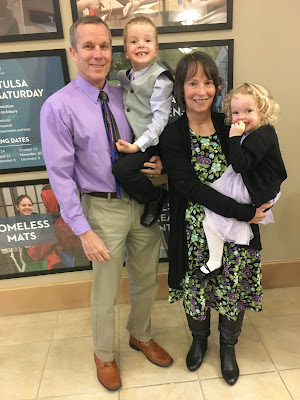 Leina went to a different church and her service started at 10 while ours started at 9:15. I didn't want to get home before her because I knew the egg hunt would go really quickly and I didn't want her to miss it. Carter wanted to use his Tooth Fairy money to buy gum so we decided to stop by the grocery store to kill time. While we were there we decided to go ahead and pick up our groceries for the week. We ended up making it home considerably later than Leina did. Carter ran in and started finding eggs right away. I had to remind him to get a basket to collect eggs in. He ran in to look at their Easter baskets and was super excited about what the Easter Bunny brought. He told Elise about her Owlette doll and started to get it out for her. Since Easter was on April 1st, the kids got some whoopee cushions in their baskets. Elise called them tootie tooties which was hilarious. Carter got a jack in the box and a Magic 8 Ball just as he'd hoped he would. The egg hunt went really quickly after the kids went through their baskets. Then Carter had a blast putting whoopee cushions in chairs and convincing people to sit in them in very obvious ways. He even led Gpa to one, making him walk backward! Then he wanted to play musical chairs with whoopee cushions in each chair. It was hilarious and they had a lot of fun. After a few games it was time for Elise to go down for a nap and Rocky and Leina to head home. 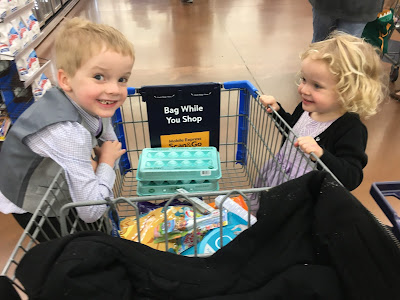 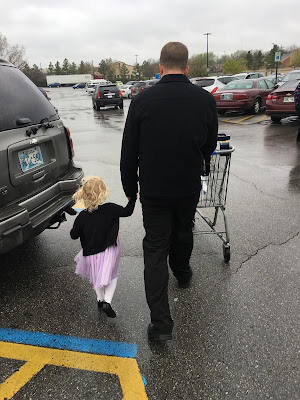 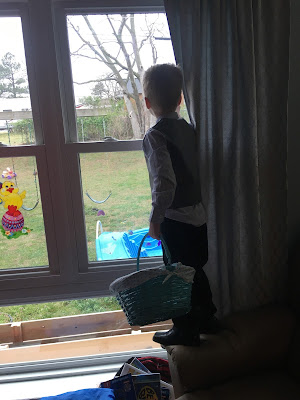 My parents were in town and had stayed the weekend with Thomas. My mom brought food with her for an Easter dinner. Ty set the tables and got everything ready. When Carter realized everyone was coming over he wanted me to help him put air in the whoopee cushions and he put one in each chair at the table. It was pretty funny! We had a nice dinner and then everyone got a little something from Oma and Opa for Easter. The kids were super excited about their Easter baskets and the Minion movies they got in them. They watched a little bit of their movie before heading to bed. We had a wonderful, although especially cold Easter! 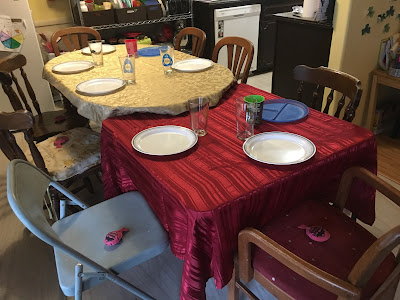 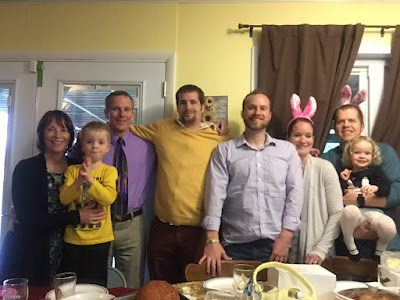 Posted by Liz Runningmomma at 11:41 AM