Saturday evening at dinner Leina asked Carter about his loose tooth. His bottom middle two teeth have been wiggly for a while now and he'd lost interest and stopped messing them. When she asked he went to show her and they were very wiggly. Ty started wiggling Carter's tooth and it just popped right out. I wasn't expecting it to happen and was responding to a text so I missed it! Carter was really excited for the Tooth Fairy to visit but was also in a bit of shock that his tooth had actually fallen out! 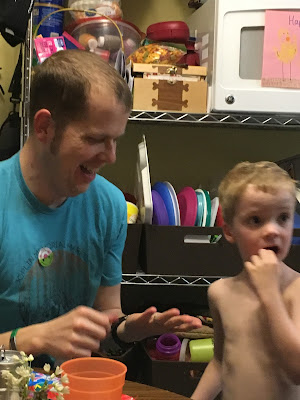 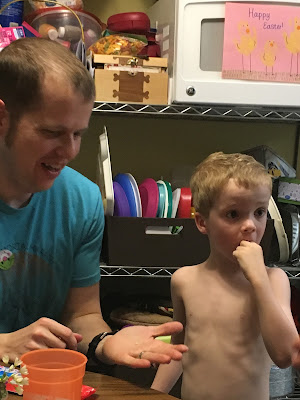 The timing was pretty crazy that he'd get a visit from the Tooth Fairy and the Easter Bunny all in one day! While Leina bathed the kids, I found the special tooth pillow Ty had used as a kid and pulled it out for Carter to use. We made sure he slipped his tooth in the pocket on the pillow and left it on his nightstand for the Tooth Fairy. In the morning when he woke up, he went running in and told Leina the Tooth Fairy hadn't come. She was shocked and followed him in to check. Eventually she discovered the dollar in Carter's pillow and he explained he was expecting circle money so he didn't realize she'd left anything when he found the dollar bill. I thought that was so cute. Leina said Carter had torn apart his bed looking for the circle money under his pillow. Thankfully the Tooth Fairy hadn't missed him! He wanted to use his money to buy gum so that's exactly what he did. Now we'll have to pay more attention to the other loose tooth so we can get it before it falls out on it's own and is swallowed! If it hadn't been for Leina asking that very well could have happened with this tooth! 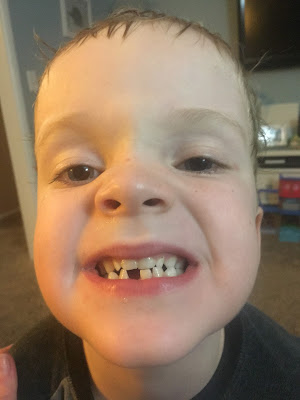 Posted by Liz Runningmomma at 6:03 PM