Run to the Lights 5k

This year was our 4th time doing the Run to the Lights 5k at Silver Dollar City. Read about 2016's race here, 2015's race here, and 2014's race here.The highlight of the race for me is getting there right when packet pick-up starts so the kids can enjoy the lights, play, and ride the rides. Ty took a half day off from work so we could get there early. Carter had school so we picked him up from school and left straight from there. Jeremy wanted to eat the buffet in the Miner's Cave restaurant in Silver Dollar City. I didn't necessarily want to eat that before the race, but I figured I'd just eat a little bit and it would be fine. I took a little bit of each thing, but made sure to skip the fried chicken, and figured I'd just try a little of everything. But I was so hungry and everything was so good, I ended up eating all of it. I figured it would be fine since we had 4 hours until the race but then as I was taking the kids out of the restaurant and heading to the kids' area, I realized it was 7:30 and we'd actually eaten 3 hours before the start of the race. That close to the race I should have definitely eaten something lighter.

Carter wanted to go straight to Fireman's Landing to play with the balls. As we walked in Elise took her bag and started laughing as she filled it with balls. It was so cute to see her having so much fun doing something so simple. The kids had a blast running around playing in that area and then I realized it was after 8:00 and the park would close at 9:00 so I asked Carter if there was anything else he wanted to do as the park would close in less than an hour. He panicked and just took off running to leave the area, it was pretty funny. We stopped off to ride the firedog ride before heading over to the train. They had already closed off the line for the last train so we didn't get to do that this time. Instead we went over and the kids played in the tree area where there are nets set up to go across. Elise just kept coming out, looping around, and going right back in. Both kids had a blast there and I foam rolled my calves and glutes to prepare for the while they played. Ever since my injuries in the spring I've needed to foam roll before runs otherwise my shin and glute are both really tight. At some point I'm probably going to have to take a chunk of time to let that heal all the way but I'm just dealing with it by foam rolling at this point. We rode the last carousel ride of the evening and then headed to meet Ty so he could take the kids back to the hotel for bed. I sent my coat back with them and headed out on my warm up. The whole time I was running my warm up, I kept burping and feeling like I was going to throw up which worried me a bit for the race. My goal was to run in under 21 minutes and I hoped I could still be one of the top 3 overall female finishers. I've come in 2nd every year I've run other than the year I was pregnant with Elise. 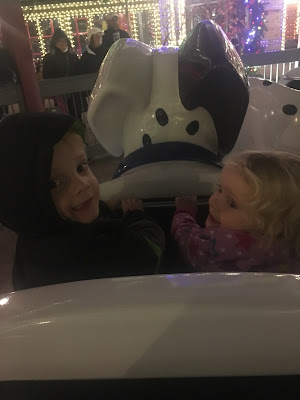 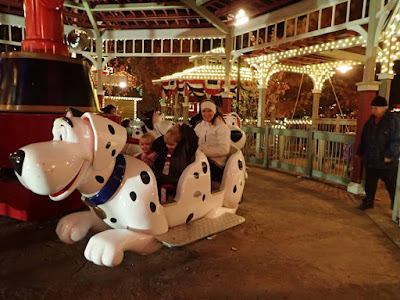 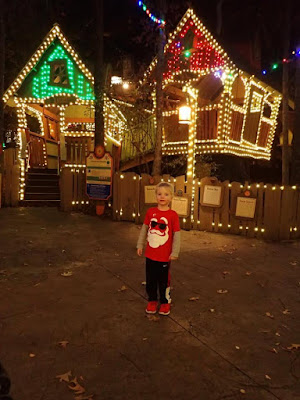 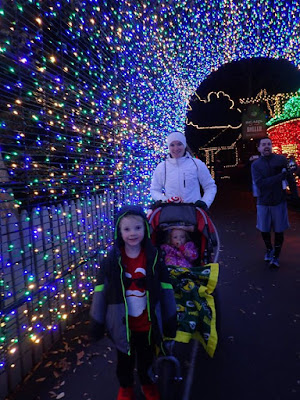 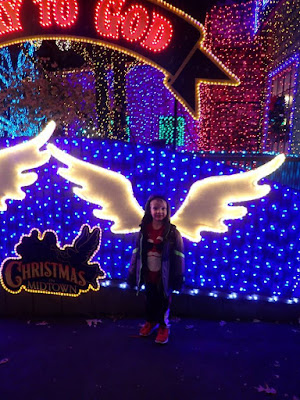 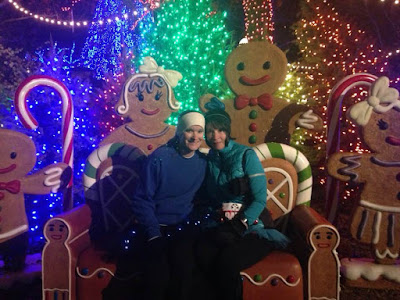 I found mom and Thomas before they started walking people to the start and then Thomas and I found Jeremy. The race loosely starts around 10:15 but has started earlier or later in the past depending on how quickly they are able to clear the parking lots. I was glad I turned my Garmin to pick up satellites early because they started the race a little before 10:10 this year. We took off and Thomas was out like a shot. The first mile is pretty fast because it's mostly downhill and then you turn and go back uphill for the 2nd mile before heading into the park where you run uphill some more as well as weaving around all over the place. We were almost to the mile mark and Thomas was still ahead of me. Normally I'd assume he'd gone out too fast and was going to fade but he always runs amazing at this race. He loves it and it's his favorite race we run all year so you can never predict exactly how he's going to run. I went through the first mile in 6:35, knowing last year I went out in 5:59 and 2 years ago I'd gone through the first mile in 6:25. I was more focused on my time from 2 years ago as I felt like I could run pretty close to what I did then. I counted 5 women ahead of me as we ran the out and back section of the course before turning up one of the bigger hills on the course. I was surprised to see that the first female wasn't out too far in front of me. Each year I got 2nd overall female, the first place female ran under 19 minutes.

I passed a few women on the straight road section after going up the hill. When we turned toward the park I was closing in on the 4th overall female and could see the other 3 women ahead of her. I found myself saying there was a chance I could catch them and win the race. I went through the 2nd mile in 7:04. Typically my last mile of this race is my slowest because not only are you running uphill but you are weaving around so much inside the park it's hard to get up to speed. I was also really fighting the urge to throw up and a couple times thought I might. With how many turns there were it was hard to gauge how far ahead of me the 1st and 2nd females were. I saw the 2nd female had caught up with the 1st female and they were running side by side. I figured that could work to my advantage because they were so focused on each other there was a chance if I caught them I could blow by them without them even expecting it. At times I thought they had about a 15 second lead on me but other times it seemed like it may have been more than that. It was hard to judge with only seeing them for snippets at a time. We turned one corner and the volunteers were cheering for me and told me I could catch the top women which was fun. Other volunteers were telling me I was 2nd female which reminded me of the year everyone was cheering for me and the girls I was catching telling us we were the top females only to find out the first female had finished over a minute before.

I really pushed that last mile trying to catch them but just couldn't quite do it. I was a little worried I'd catch up to them and then throw up which I thought would be super embarrassing as I wasn't throwing up from exertion so much as from eating improperly before the race but they wouldn't know that. When I made it to the bottom of the last really big hill I realized there wasn't enough time left in the race for me to close the gap the rest of the way and I just sprinted in the best I could. I ran the last mile in 6:59 for a total time of 20:40. 1st place was 20:25 and 2nd was 20:30. I was a little disappointed that the year I had the best chance to win, I wasn't in shape to do it. I was really pleased to be under 21 minutes like I'd hoped and to have run only 4 seconds slower than I had 2 years ago when I'd been running weekly speed work and bi-weekly tempo runs. I haven't done much speed workout this season as my main goal has been to let my body heal up so when my body was feeling tired or sore I skipped my speedworkout for the week. I hadn't done speedwork in about a month going into this race. When I decided to switch to the marathon the tempo runs were the first to go as I needed to do long runs every weekend to get up to 22 miles before race day. So with my lack of speed training this race went much better than I expected and I was pleased with that. I did wish I'd made better food choices as I felt like that negatively affected my race but even having eaten lighter I may not have won the race so I didn't care too much. I wouldn't eat like that before a race again but I don't regret it either.

Once I crossed the finish line I grabbed a water and headed straight for the finishing hill where I've gone to cheer on Jeremy, Thomas, and dad each year. I missed Jeremy and Thomas finish and realized they must've been closer behind me than the previous year. I ran my cool down out to mom and finished the race with her. Then I kept running to finish out my full cool down and ended up down in a really gorgeously lit area where they had a couple of light tunnels which I ran through and loved. I was so pleased with my race and having run faster than I had expected that I enjoyed the lights even more than I had earlier in the evening. I still felt like I was going to throw up during my cool down and even while just standing around waiting for awards. We drank hot chocolate and hot cider after the race but skipped the sugar cookies as our stomachs couldn't handle it. I finished 3rd out of 566 females, 2nd out of 99 in my age group, and 31st out of 956 total finishers. Thomas finished in 21:07 which put him 4th out of 72 in his age group and 36th overall. Jeremy finished in 21:51, good for 3rd out of 70 in his age group and 51st overall. Mom finished the race in 36:03 which put her 8th out of 26 in her age group and 474th overall. When we got back to the hotel Ty had asked me to call him so he could let me into the room as there was only one room key. I called him probably 8 times and he never woke up so I finally just knocked on the door. Luckily it didn't wake either of the kids. As I went over to brush my teeth I noticed Carter was sleeping on the floor. The next morning Carter said he didn't know how he ended up on the floor so I'm guessing he fell out of bed. We really enjoyed our trip and are looking forward to visiting Silver Dollar City again with our tickets that were in our race packets.

Posted by Liz Runningmomma at 11:56 AM