Last year everyone ran the Run Tulsa Pink 5k which benefits cancer patients and research. The race is late in the evening so I stayed home with the kids. It sounded like such a fun race with pink lights decorating the finish line, cake and punch at the finisher's party, and a balloon stomp after the race. The Monday before this year's race mom asked if any of us wanted to run it and I was quick to say yes. I had run the Aquarium Run 10k the Saturday before and had a great race. The 5k was on Sunday evening so I knew I'd have to rearrange my training schedule a bit to give myself some recovery time before the race. I had planned to wait until Thursday to do speed work to ensure I was mostly recovered from the 10k but went ahead with speed work on Wednesday so I could have a longer recovery period before the 5k. I went into that workout with still tired legs which ran over to race day. I felt it in my legs during my warm up, they were still fatigued.

Dad and Jeremy came over to our house to watch the kids while mom, Thomas, Ty, and I headed to the race. Going into the race I was hoping to shoot for a 20:35 or under. When we got outside to leave for the race I realized the wind hadn't died down as much as I had thought and was around 30 miles per hour. I adjusted my goal to 6:45 pace which should put me just under 21 minutes if the course was exact. My focus switched from time to place. It was a smaller race so I was a bit worried that it would be spread out to where I couldn't see anyone ahead of me because I was unable to find a course map anywhere. The race turned out to be incredibly well marked. As we headed to the start line I took stock of the runners ahead of me and didn't see anyone who looked like they may be competition for me. Finally with just a few minutes to the start two men walked up together and I knew they would be leading the race. We took off and I was impressed with how quickly everyone took off. I didn't have trouble with anyone going out slowly and impeding those behind them. I counted 7 women ahead of me. As we neared the half mile mark I had moved up to 2nd female and was closing in on the girl in first. I passed her before the mile mark and then came up beside a young boy. I'm not sure what his deal was but he kept looking over at me and cutting me off which was terrible. By the time I hit the mile mark I was in 3rd place overall. I could see the man in 2nd but he had a decent sized gap on me. My split for the first mile was 6:46.
During mile 2 I started noticing how much my feet were rubbing from all the turns on the course and I could feel a blister forming on my left foot. I wanted to slow down but kept telling myself to get a strong tempo run in. Although the first mile had been a bit slow for me, my legs were already feeling fatigued. I knew I was decently ahead of anyone behind me and the urge to ease up and coast the last couple miles was pretty strong. I kept pushing anyway and went through mile 2 in 6:41. I felt good about the splits I was running since the race was more of a tempo for me in terms of having anyone to run with. I wanted to get a quality workout in so I really focused that last mile when I was feeling tired and not motivated since I was running alone. The third mile had a decent number of hills so although I felt like I was picking up the pace, it was my slowest mile in 6:48. As I turned the corner toward the finish I could see pink lights wrapping the bridge and I was so ready to be done. As I approached they pulled out a finisher's ribbon and stretched it across the finish line that said "First Overall Female Finisher". That gave me a bit more pep in my step and it was fun to break the tape as I crossed the finish line. As I walked to get water the banner wrapped around my ankle so I had to stop and pull it off.
I watched Thomas finish and then headed off on a cool down to jog back with Ty. We talked for a bit and then he took off sprinting to the finish. I jogged back so I could watch him finish and then headed back out to run/walk back with my mom which is always so much fun. I got a lot of compliments on my shoes because I had tied the light up blinky rings they gave us in my shoe laces. Mom was excited to see me and hear that I had been the first female finisher. I ran walked to the finish with her and heard them announce us as we were finishing. We stuck around for awards and faired really well. As the top female finisher my award was a giant cake from a very popular local bakery. I was 1st out of 228 females, 3rd out of 346 total finishers, and 1st out of 19 in my age group with a time of 21:19 for the 3.17 mile course which averaged to 6:44 per mile. Thomas also won his age group. He was 7th overall and 5th out of 118 males with a time of 22:46. Age group awards were mugs and Ty also won one, placing 3rd out of 11 in his age group and 46th overall in 28:10. Mom ran/walked with 30 seconds running sandwiched between 2 minute walking segments. She finished in 46:39 which put her 8th in her age group and 266th overall. We all had a lot of fun and are now looking forward to the Get Busy Livin 5k in a couple weeks. 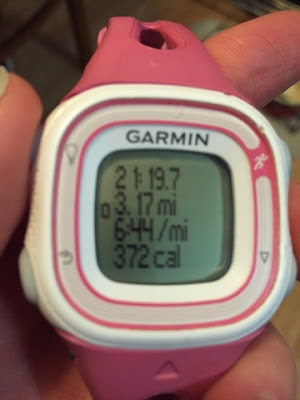 Posted by Liz Runningmomma at 8:05 AM