I wrote about Carter's sleep troubles when he was around 3.5 years old here and here. Ever since then he has been a straight boss at bedtime. He goes right to bed, is quiet, and doesn't mess around. This past summer we started having a really hard time with Elise at bedtime. She'd get up out of bed over and over, coming in to say something or other every time. She'd also get up saying she had to potty, but just sit on the toilet not doing a thing. It was super frustrating. I remembered Carter going through a similar phase at around the same age so I wasn't too worried at first but then the problem never got better and kept getting worse and worse. It was driving Ty nuts and it was for sure effecting Elise's sleep. Finally I stopped and thought to myself, what would I do if this was one of my students. I've found I often come up with better solutions when I approach the issue as a teacher rather than as a parent. When I think of it as a parent I tend to think of all the advice I've been given from parents (not our parents), which to be honest, is often times not very good. Typically the first thing anyone will tell you is to spank your child and I've found that to be a highly ineffective means for behavior management with my children!

I wanted to do a social story for Elise, giving her our specific expectations for her behavior at bedtime. I wanted her to know what we expected from her every night. We read her book to her and then told her if she could stay in bed and stay quiet at night she'd get to put a sticker on her chart and she'd also earn 15 extra minutes to stay up past bedtime. I told her that time would be hers to choose whatever she wanted to do. Every night she ended up choosing tv or tablet time, no surprise there. Once she got 5 stickers she could pick something special to do. It took one night of getting her extra 15 minutes and then the next night losing her 15 minutes for her to realize how things worked and to shape up. After just one night of getting out of bed and not staying quiet at bedtime we no longer had an issue. She was quiet and stayed in bed every night. She is smart and it doesn't take her long to learn which is nice. I was so pleased it was such a quick solution and it has now been about 5 months since we've had trouble with her at bedtime. She has a night every now and then where she'll yell out at bedtime but usually a gentle reminder that she'll lose her 15 minutes is quick to quiet her. She loved her social story. We read it every night for weeks and then she would pull it out and read it to herself, so proud that she remembered the words. With my terrible illustrations it really was impressive she could use the pictures to remember what the words said! 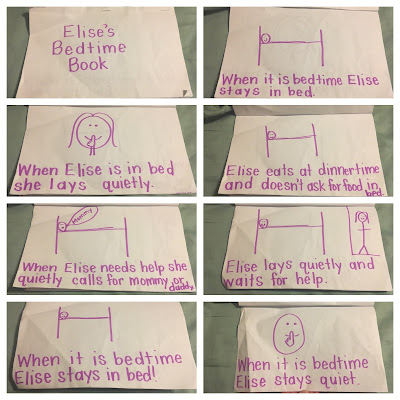 The first week she chose to get ice cream and the 2nd week she got money to spend on fireworks for the 4th of July. We discontinued the stickers after week 2. Now we only give her the extra 15 minutes which I give her when she sits in car line waiting to pick Carter up from school rather than at bedtime, so it is nice for me too! I started this post this summer but never finished it. I decided it was only fair to Carter for me to document that Elise had some trouble at bedtime at about 3 years old too. I just feel bad for Carter that I didn't come up with a better solution for him at the time, but you live and learn! Now all we have to do if Elise is yelling or talking in bed is remind her that she'll lose her 15 minutes and she shapes up right away. She never gets out of bed at bedtime anymore. It is wonderful! 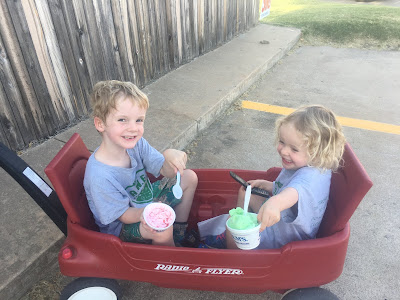 Posted by Liz Runningmomma at 1:01 PM