This summer after running the Armadillo Trail Race, I looked up other trail races in the area. Ty had so much fun at the Armadillo, I was excited to find more for him to run. I enjoyed it too but I could tell Ty had absolutely loved it! I came across the Red Dirt Shuffle race which included a 5k, quarter marathon, and half marathon. It was the day after the Corndog Challenge 5k but I knew we'd need to do a long run that day anyway so we might as well make it a fun race! I invited Thomas and he was excited to go too. The race was a little over an hour away and started at 7:30 on Sunday morning so we asked my parents if they'd mind staying with the kids so we could run the race since they'd be out for the Corndog Challenge anyway. They agreed so we paid our entry. 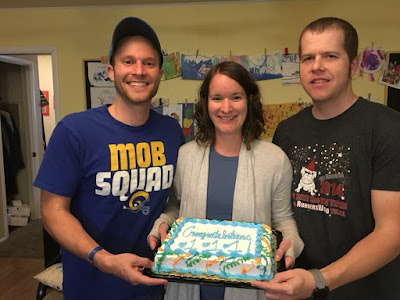 I ended up running the Corndog Challenge 5k faster than expected so my legs were a bit more fatigued than I had planned going into the Red Dirt Shuffle. I did a mile warm up before the race and they felt decent. Ty was running the quarter marathon which started after our race. His race would be one lap out on the trail and ours would be two laps. My plan was to run conservatively the first lap to see how much elevation gain there was, how technical the trail was, and how my legs were feeling. Then if I was feeling good I could pick It up during the second lap. Some people took out pretty fast so there were a few people ahead of us. When I caught up to the girl in first I planned to just tuck in with her and run there for a while. Then Thomas went over a bike ramp and zoomed past us. I figured I'd go ahead and go with him when I had room to get around the girl I was running behind. It took a while before I had an opening. Thomas had built a little bit of a lead on me and I didn't want to push the pace to catch up with him since I was wanting to run a conservative first lap. About a mile into the race I passed a guy who was between me and Thomas and then Thomas was the only person I could see.

The trail wasn't very technical with just a few rocky sections and some roots. I still needed to keep my eyes down a fair amount, but it wasn't difficult. The hardest part of the trail was all the turns. We were pretty much constantly turning. I felt like I couldn't really stride out because I was always taking turns so my stride was shorter. It felt great when we had a section that had a straight for a bit so I could stride out. I could see Thomas for the first 3 miles or so but then we hit some bigger hills and I lost sight of him. I told myself he would be powering down the hills so I needed to not hold back on the hills or I'd lose sight of him. I powered down one hill and it had a turn at the bottom of it which caused me to almost run directly into a tree. After that I held back and slowed on the downhills. My dad had advised me before the race that I should be careful not to get injured. We both agree that I will run a new marathon PR this season unless I get injured and I knew this race wasn't worth ruining that, especially when I could be the first female finisher without putting in much effort. We passed a water stop around 4 miles into the race. I decided not to stop since I was wearing my fuel belt and was still doing fine on water. The temperature was cooler than it had been so I wasn't drinking as much water as I normally would for a long run.
The trail was 7.6 miles long so to make the 13.1 distance they had us turn early before the end of the trail. There was a woman standing at the turn and I thanked her thinking she was a volunteer with the race. Later I saw her running a different section of the trail and realized she may have just been someone out running who moved off the trail so I could go by. I finished the first loop and looked at my watch to see I was at 6.12 miles. I knew for the correct total distance I should have finished the loop in 6.55. I started freaking out that the lady I thought was at the turn was really just a runner who moved off the course and I had turned early. I was worried the reason why I couldn't see Thomas anymore was because I had cut the course and he was now behind me. I decided when I got out to the area where I turned around I would run out to the correct turn around and the run back to where I'd cut and go back up to add the distance I had missed. My splits for the first 6 miles were 9:14, 8:40, 8:50, 9:09, 9:42, and 9:32. I wouldn't put much stock into my Garmin splits though because my Garmin struggled with the race.

When I got to the turn around the second time I saw I had turned in the correct place during the first lap which made me feel better but then made me wonder if the course was short. When I got to the last 2 miles of the race I started getting excited that I hadn't fallen during the race. I started excitedly thinking, "This is my first trail race without falling down!" Pretty soon after that I hit a stump going around a turn and stumbled but didn't fall. Then as I was rounding the turn to the finish and really pushing it in I tripped on a rock and almost went down as everyone was cheering me in. Thomas said when he saw my ankle bend he was sure I was going down. I figured that's what I get for being excited I hadn't fallen! Now I can say I've finished a trail race without falling down! My Garmin showed 12.28 miles for the race. Everyone else's showed at least 12.5 with a few being closer to the accurate 13.1 miles. I think my Garmin just struggled because my mile splits at the end of the race were all wonky. I picked up the pace for the last two miles and really kicked it in but my Garmin showed both those miles being over 10:00! My mile splits according to my Garmin for the last 6 miles were 9:22, 9:16, 9:00, 9:10, 10:15, 10:02, and the last portion of the race was 8:04 pace.

After I finished Ty told me Thomas took 1st place and I was 2nd overall, 1st female. Then he said he won the quarter marathon and I was super impressed. It sounded like he really enjoyed himself and had a great race! Mom thought it was neat that all 3 of us won so she got a special cake at the grocery store which was fun! I enjoyed this race but was a little bummed there weren't as many runners so I couldn't really see anyone after 3-4 miles into the race. I hoped I could catch up to Thomas so we could run together but he was having a great day and I didn't want to all out race so I just did my own thing. We're looking at adding a few more trail races to our schedule this winter. Ty definitely loves them and the different challenge. I enjoy them but there's just something about running all out as fast as you can on the road that I love! I also prefer being able to run as fast as I can without having to look down and worry about falling. I enjoy trail races but road races are still my favorite! That may be in part because I've never run a trail race even semi-fresh. Maybe this winter if my legs aren't as tired going into a trail race I'll enjoy it more. It is nice to not worry about pace and just run!

Posted by Liz Runningmomma at 12:44 PM