I was so excited after my race at the Corndog Challenge 5k, I decided I wanted to add another 5k into my fall race schedule in an attempt to better my post-baby 5k time of 19:29. I felt if I could run a 20:15 while eating food I had a really strong 5k in me. Ty wanted to run the Gorilla Grind 5k in Pittsburg the weekend after fall break so we decided to do that. It put me racing a 5k the weekend after a half-marathon but I felt confident I could still run a strong race. Then the week before the half marathon my hamstring/glute issue flared up with a vengeance. After the race I was doing my PT exercises like crazy, but it wasn't healing up as quickly as I needed it to in order to run the kind of 5k I was hoping to. I still wanted to run the race though so I decided I'd run it as my speedwork for the week and just run whatever I was capable of. Around that time I started looking more at my training schedule and realized if I didn't do a 20 miler the weekend of the Gorilla Grind, my last 20 miler would be 7 weeks out from race day. After some consulting with my friend, Sara, I decided to run my 20 the Wednesday before this race, so 3 days after the half marathon. I took the 20 miler super easy and relaxed, averaging a little under 9:00 pace for the run. My legs felt pretty good afterward but I knew they wouldn't be super fresh for the 5k. I figured I could probably still run a sub-21 minute 5k.

The morning of the race I ran my warm up to the race and then ran a little more once I was there. I needed to find mom and Ty to get my bib before the race and was a little worried about locating them in time, but had no trouble since Ty was wearing a banana costume and easily visible as I ran up. I had time to pin on my bib and do a quick restroom break before heading to the start. The gun went off and the guy in front of me was messing with his phone so I ran directly into his back since he just stood there when the gun went off. I felt bad, but what do you expect when you are just standing there at the start of the race! I took off and I felt like I was flying. My legs were telling me I was running a much faster pace than I actually was! The race went out pretty quick and there were at least 5 women ahead of me. I didn't count but just estimating off what it seemed like. By the first half mile I had passed all of them and was the first female. I ran this race last year the day before a 22 mile long run so I took it easy and didn't try to race it. I didn't remember all the turns in the race, I guess since I wasn't trying to race but there were a lot of turns! I went through the first mile in 6:40 and was pleased with that although it felt like I was running much faster than that! I definitely missed having Jeremy to look up to and pace off during the middle section of the race. 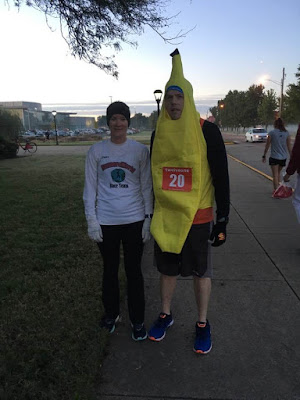 I caught up to a guy ahead of me and tried to pass him but he cut me off so I tucked in behind him until he started slowing again. I went to go around him again and he again cut me off. I gave him the benefit of the doubt that he wasn't meaning to cut me off but was just tired and veering over toward me each time I went to go around him. I dealt with that for a mile before I lost my temper. Every time I'd go to pass him he'd cut me off and speed up, only to slow down again a little bit later. My legs weren't super fresh so it was hard for me to stutter step and slow down to not get slammed by him. I didn't care at all about beating him, I was just trying to run as fast as I could. Finally at around 2 miles in when I went to pass him and he did it again, I went to pass him on the other side and he again cut me off. That's when I lost it and had some choice words with him. He backed off and let me pass and I was able to run my own race again. My split for mile 2 was also 6:40 which surprised me because I was so sure dealing with his shenanigans had slowed me down!

I took off that last mile and passed a few people and reeled in a few more that I just didn't quite have time to catch. I was really pleased that I was able to run my last mile the fastest even though it wasn't by much. My last mile was 6:38. I ran such a tough race and was pleased that I ran really consistent splits and pushed myself even though I had about a 2 minute lead on the 2nd place female. There's a short little out and back toward the end of the race and I counted out what place Ty was in when I saw a banana approaching me. He was hoping to be in the top 25 because they were giving out cool mason jar cups to the top 25 finishers. I yelled out to him that he was in 17th place even though I had less than a quarter of a mile to go and was sprinting it in so I was pretty tired. I was disappointed to find out after the race that he heard me yell 17 and had no idea what I was talking about! I kicked it in for the last portion of the race at 5:55 pace. I was really gunning for 2 guys in front of me who were duking it out but wasn't able to catch them. I was pleased to finish in 20:52 and 6:37 average pace. 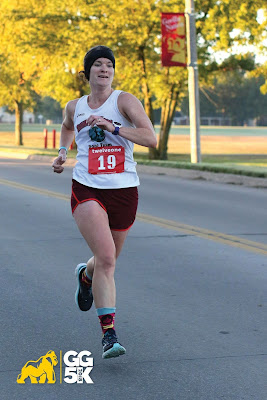 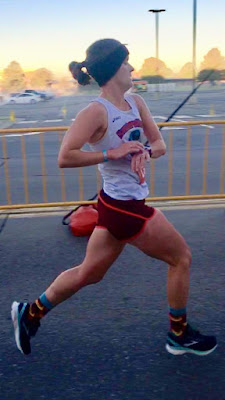 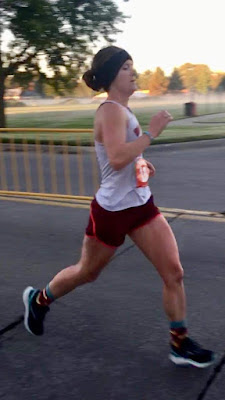 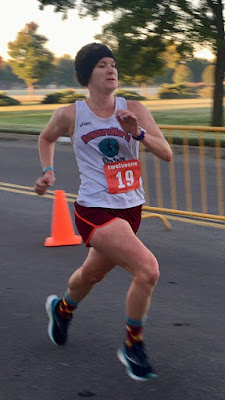 I watched Ty finish and was disappointed they didn't have a clock at the finish line because I knew he was hoping to break 24 minutes to set a 5k PR in a banana suit, but I had no idea what time he was finishing in! He looked rough and I wasn't sure if he looked rough because he had run so hard or because things weren't going well! It turned out he looked rough because he had run so hard! He finished in 23:52, beating his previous PR by 20 seconds! He was 17th out of 80 overall and 4th in his age group. I was 7th overall and 1st out of 40 females. 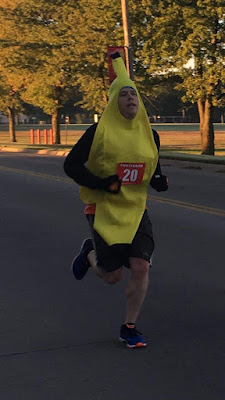 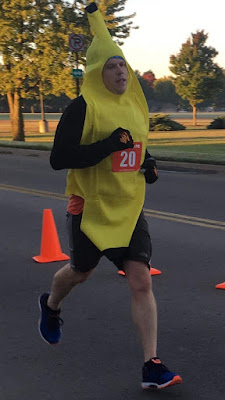 Ty wanted to run a cool down to get a longer run in for the day so he ran with me out to run mom in to the finish. Mom had gotten matching gorilla socks for me and her to wear and they ended up looking really cool! As we were running toward the finish line Ty and I turned off to do a longer cool down but then I heard the kids cheering so we ran over to give them kisses and say hi to them first. Dad stayed home with them and they woke up at 7:30 so he brought them out to see the finish. Mom finished in 34:11, 59th overall and 1st in her age group. I was glad I went ahead and ran the race. It was a lot of fun and I was pleased I was still able to run a decent 5k that soon after a 20 mile long run! I guess I'm becoming more of a marathoner after all! 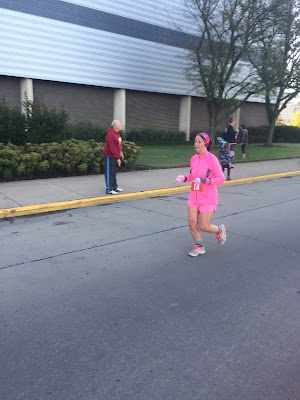 Posted by Liz Runningmomma at 12:03 PM