The Search for a Dog

After Harper died I needed some time to grieve before I was ready to talk about getting another dog. After about a month without a dog I started missing not just Harper, but having a dog. I missed having a buddy to take walks with and someone to pet when I needed a pick me up. I missed having a shadow as I walked from room to room. Not having Harper made me feel more alone. I finally felt like having another dog wouldn't make me miss Harper more, it would help fill the hole that was left when she died. We looked at some shelters here and I found myself looking at the dogs and all I could really think was, it's not Harper. That made me feel like maybe I just wasn't ready. Then when we went to Pittsburg after fall break Ty was really pushing to look at dogs there. I don't know why but I was a little hesitant. So far seeing other dogs had just been another reminder that Harper was gone and it was bumming me out a little bit. We got into Pittsburg on Friday afternoon with a little bit of time before the Humane Society closed so we figured Ty and I would go just to see if there were any dogs we might be interested in going back the next day to see. We were certain we wanted an older dog, absolutely no puppies! We were also looking more for a medium sized dog, no small dogs. I immediately spotted a sweet dog who came right up to the door of her kennel and wagged her tail without barking at all. She watched us the whole time and was very eager to see us. We talked to the workers there and found out her name was Coraline and she had just had pups. We decided to go back the next day to walk her and see how she did with the kids. That night I didn't think much about Coraline and I just fell right to sleep.

We went back on Saturday to walk Coraline. My dad wandered off from everyone else and then came back over to me and said, "I found the dog for you." Knowing my dad I thought he was joking and had found a terrible dog. I walked over and this adorable little beagle looking dog came running over to the fence and followed me up and down the fence line. She didn't bark or jump but was just darn sweet. I did instantly like her but we were told she was a puppy and I was very much against getting a puppy. After potty training Harper was such a nightmare, I just didn't want to deal with potty training a puppy again! We went to get Coraline and took her for a walk. She was wonderful on a leash. She loved the kids and was super sweet with everyone. My mom was worried since we hadn't put in an application on Coraline that she might get adopted by someone else. I wasn't worried. I told her if Coraline was adopted by someone else, then she just wasn't the dog for us. I just wasn't in love with her or dead set that she was the perfect dog for us. I looked at her and still had that feeling of, she's not Harper, but I wasn't sure that I wouldn't have that feeling with any dog, no matter how wonderful it was. We decided to go back later with my parents' dogs to see how they interacted with her. Coraline did okay at first but then she attacked their biggest dog, Fezzik, and we had a very difficult time pulling her off. Fezzik is the gentle giant. He is an absolute doll and would never start a fight but if a dog attacks him, he will protect himself. I looked at Ty and said, "This one is a no go." I was sad because I had liked her and I felt like she was a good dog. Plus dog fights are awful and I was sick to my stomach from that. Ty turned to me and said, "Well, do you want to try out that puppy?" I knew we wouldn't get her because she was a puppy but I told him that was a good idea because it would cheer me up and I was bummed Coraline wasn't going to work for us. 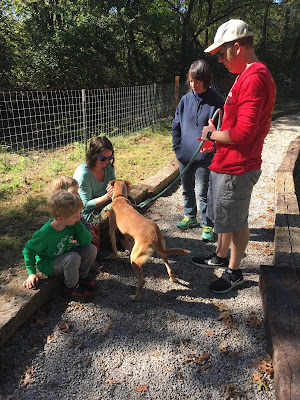 We got the puppy out and found out her name was Tesla. She was just the sweetest little thing. She walked well on a leash and wanted to be held and snuggled. She sat in our laps constantly and I pretty much immediately fell in love. I was surprised that instead of looking at her and thinking, she's not Harper, I kept thinking, she's not Harper but that's okay. I just adored her and I could tell Ty did too. My mom thought she was wonderful and she got along wonderfully with all of their dogs. She wasn't scared by them and we even let all 3 of them in with her at once. We tentatively put an application in on her and left. That night I was so excited about seeing her again the next day I couldn't sleep. I was amazed by the difference in how I felt about her compared to every other dog we'd looked at. My dad had really picked out the perfect dog! And she was a dog Ty and I would have both overlooked because of our bias against puppies. She turned out to be 6-7 months old which was great timing because it was time for her to get spayed so she'd be ready to adopt very soon. 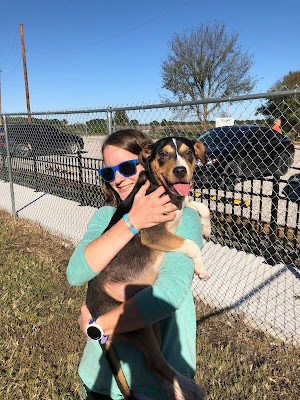 On Sunday we took the kids to meet her and that sealed the deal. She played and ran with them and just loved on them. She was perfect. My dad got to see her out of the kennel and agreed that she was pretty perfect. We even liked the name they had given her and decided there was no need to change it. I loved hearing the kids say, "Come here, Tesla! Here, Tessy!" She'd play with the kids and then roll over to her back so they could rub her tummy. She liked her neck rubbed too, just like Harper. She had enough little mannerisms that reminded me of Harper that it just made me feel like she was home already. But she didn't have some of the more difficult characteristics of Harper's personality that made it hard to take her to public places. 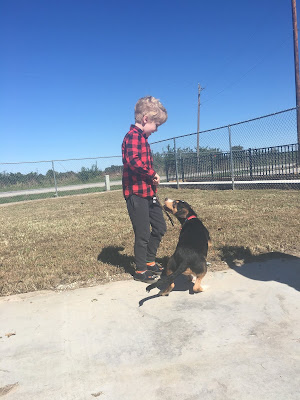 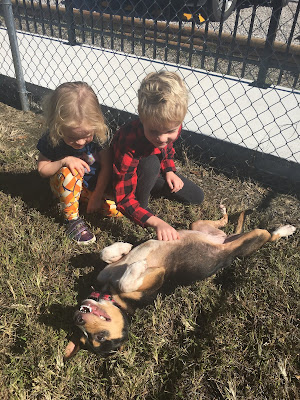 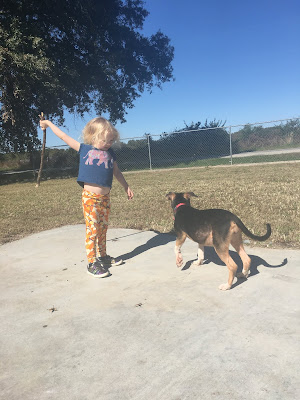 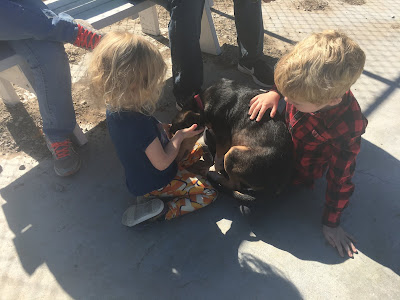 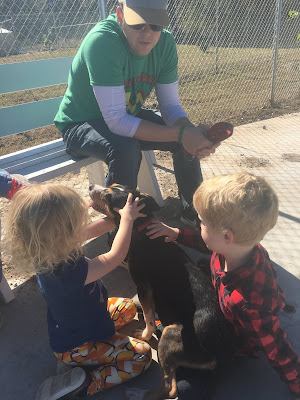 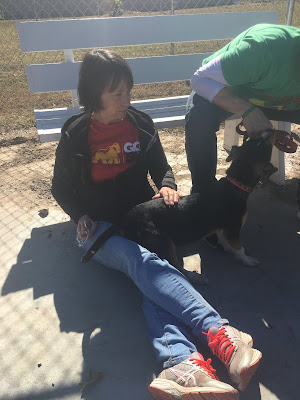 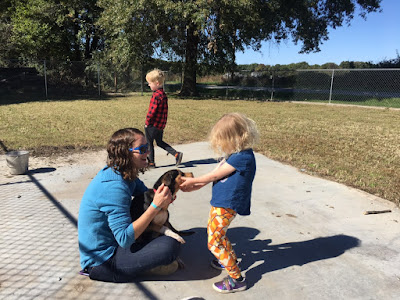 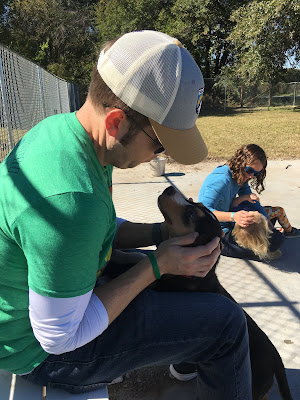 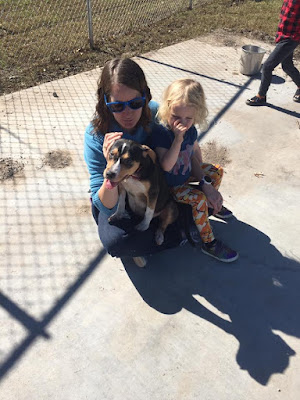 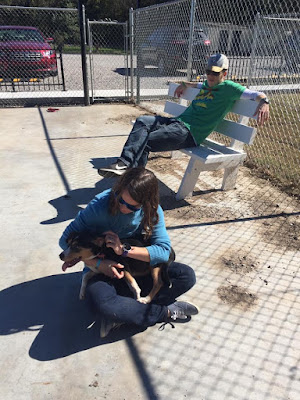 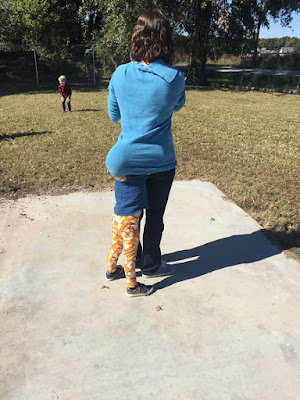 We left that weekend excited to hear back on Monday about when her surgery would be scheduled. Ty worked it all out with my parents' vet for her to have the surgery there. Then he took the day off work on Friday because he has extra days he needs to use before the end of the year and went to pick her up. She immediately became the perfect addition to our family and we all love her so much. As I write this she is laying in Carter's bed taking a nap with Elise. She's already potty trained with no work on our part and had only had an accident overnight. Last night she didn't have any accidents overnight. We have been shutting her in the laundry room to sleep but will be able to let her sleep elsewhere if she continues to go through the night without having to potty. She is great with Skippy and just watches him. She doesn't chase him or bark at him and is just eagerly awaiting his interest in friendship. We are so glad dad happened to walk over to the small dog area and picked Tesla for us. She is the sweetest dog and we are so pleased to have her join our family! 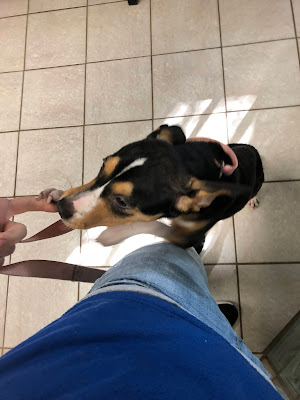 Posted by Liz Runningmomma at 6:19 PM