When we were getting things ready for Carter's birthday party Elise told me she wanted to have a Paw Patrol birthday party too. That made things easy because we just re-used stuff from Carter's party. After having Carter's party at a venue outside the home, I asked Elise if she wanted to have her party at Carter's school. She said she wanted to have her party at our house. I was a little disappointed because it was so nice and easy to have the party somewhere else. But then the week of her party as I was cleaning the house and doing stuff I don't normally do like scrub the baseboards, she asked me what I was doing. I told her I was cleaning the house to make it look nice for her party. She said, "Thank you, mommy," and then kissed me. It was so sweet and definitely made all the extra work of having it at our house worth it!
Since Elise wanted a Paw Patrol party we got to use the Paw Patrol cut-out painting Thomas drew and my parents helped paint for Carter's party. We also used the Paw Patrol stuffed animals as decorations again as well as the Happy Birthday sign. Since Skye is Elise's favorite character we picked the Skye design for her birthday cake which meant they used pink and purple icing and decorations on the cake and the cupcakes. I had gone with red and blue for everything else to match Paw Patrol colors but they still looked good together. We went simple with food just putting out oranges and goldfish for the kids. I put out some Paw Patrol coloring pages and puzzles for activities but most of the time was just spent in the backyard playing as the weather was perfect. 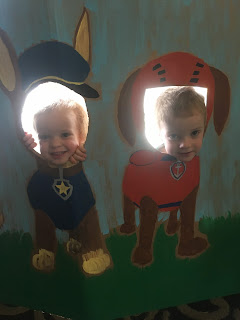 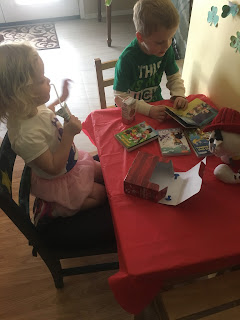 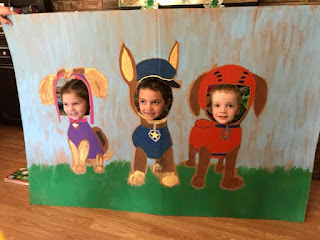 Elise woke up from her nap just a little bit before her party and came running out so excited to see the kitchen decorated. She kept exclaiming over the fact that everything was Paw Patrol, it was so cute! Then as people started to arrive she took her Uncie Taco into the other room for some quiet time reading books before she was ready to really party. The kids got the Paw Patrol headquarters for Christmas from Santa so I set that out with all their Paw Patrol toys so the kids could play with it. It was a big hit and was played with a lot until all the kids went outside to play. As usual, Elise insisted only Uncie J push her in the swing because no one can do it quite like Uncie J. 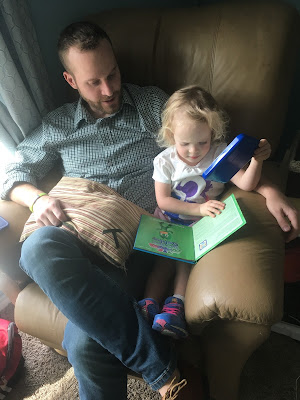 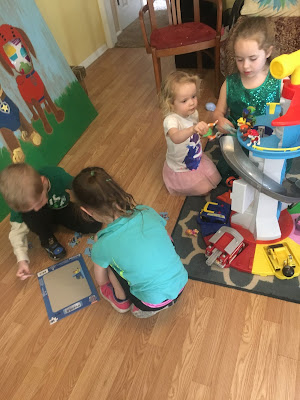 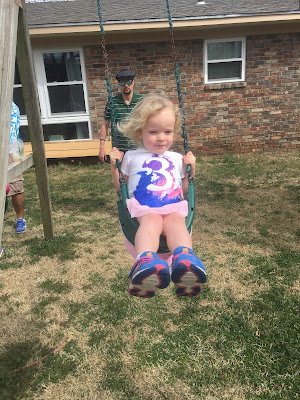 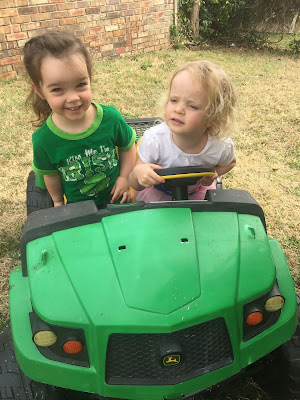 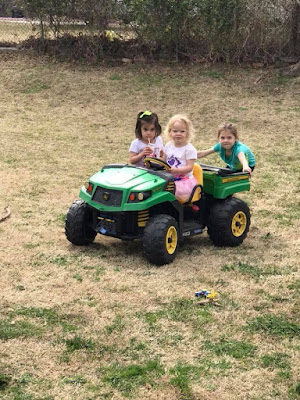 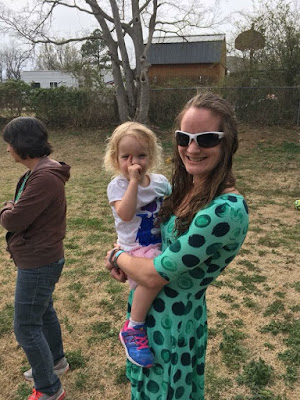 We let the kids play for quite a while and then we went back inside for cake and presents. Elise was so thrilled that Skye was on her cake and seemed to really enjoy everyone singing her Happy Birthday. I had asked her if she wanted a number 3 candle or 3 candles on her cake and she picked both. She was able to blow both sides out on the first try when the cake was turned for her. 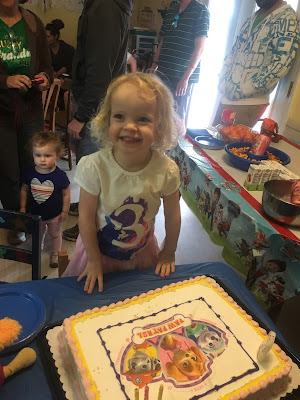 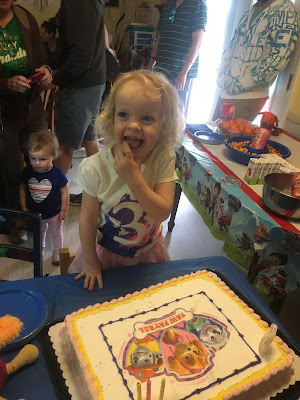 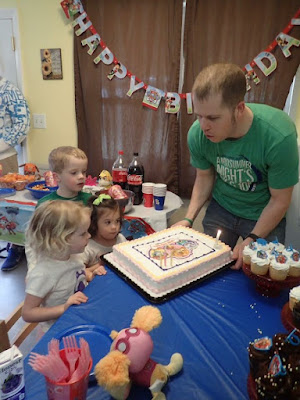 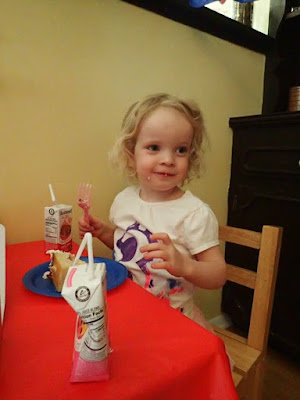 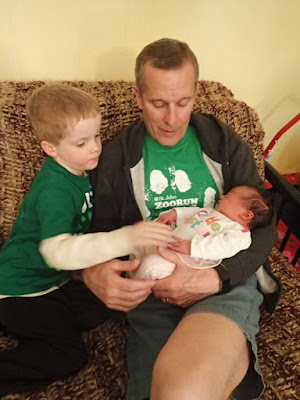 After cake we moved on to presents. None of the kids wanted to watch her open except for Carter. He was more excited than Elise for some of the presents. She was super excited about her scooter from Uncie Taco and then wanted to open and eat her fruit snacks from Uncie J. Her friend Nora got her a track with a Chase car and Carter ran over telling her she got Elise the best present ever. She also loved some lip gloss she got from Finley and got lots of cute clothes! Her Owlette and Skye stuffed animals from Oma and Opa had to go to bed with her that night. I couldn't get over the cuteness of her jeans with gold hearts on the knees from Gma and Gpa, they were precious! 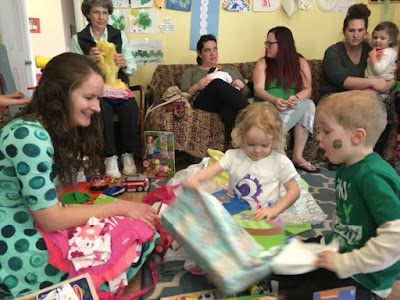 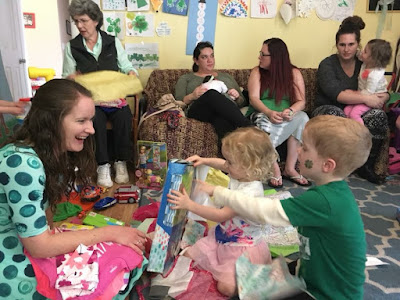 When Ty was picking up a few last minute things for the party he saw a Skye pinata and wanted to get it for Elise since Carter had a pinata for his birthday. Elise was a little disappointed at first that she'd missed the pinata when trying to hit it so Ty helped her and she really enjoyed it. The kids really went at her but only a few were actually picking up candy until they were instructed to do so. It was pretty funny to see some of the younger kids hit the pinata. 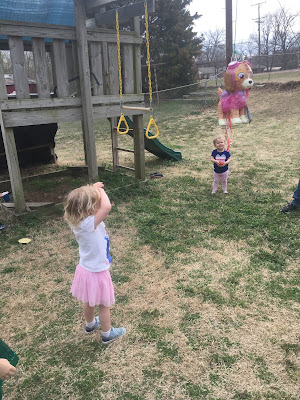 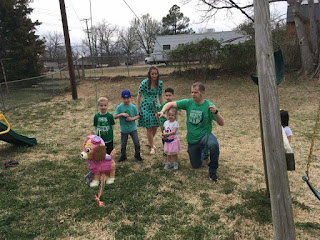 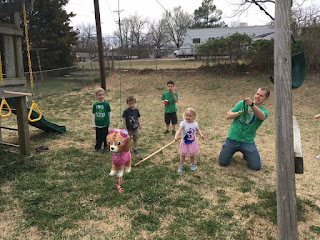 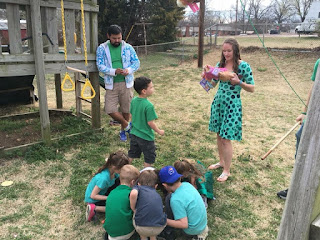 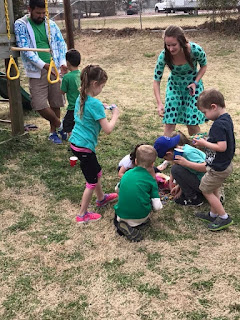 Before the kids left I thought to get some pictures of them together. While they were playing outside I had started putting things away and picking up and had already put up the card table we used as a cake table. It worked perfectly to do pictures against the backdrop. Elise was so adorable posing with her arm around her friends. It was the most compliant she has ever been when taking pictures for me, I was shocked! It was easier to do Elise with her friends separately rather than attempt a picture with the little ones all at once. Elise's best friend was sick and wasn't able to come which was too bad, but she still had a blast and certainly loved all the attention! 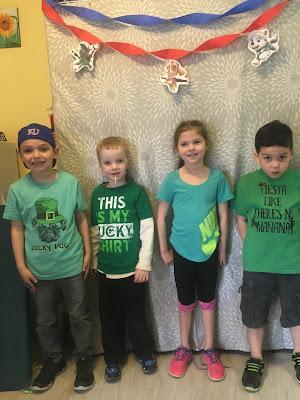 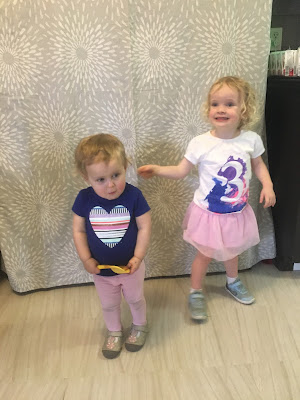 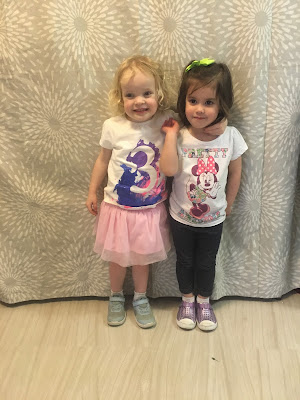 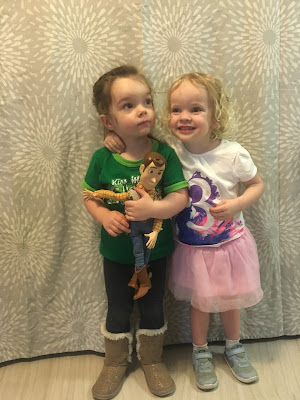 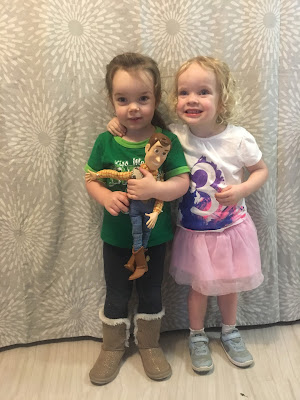 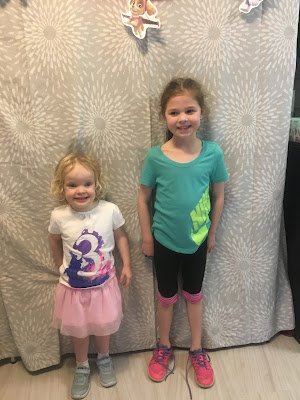 Even though it is more work to do a party at home, it sure is a lot of fun! I've gotten pretty good about making a really detailed list for myself writing out even seemingly simple things like: set out drinks, scrub chairs, and hang streamers so I don't forget anything. I also love checking things off lists so it gives me great satisfaction being able to do so. It sure was a joy to celebrate our sweet Elise with our family and friends. We sure loved playing with everyone and I was impressed with Elise's skills as a hostess. She was very generous and was just adorable taking pictures with her friends! It will be fun to see what she wants to do for her 4th birthday party. Carter has already planned out an airplane party at the Air and Space Museum for his 6th birthday. We'll see if that actually happens once December rolls around because he had a PJ Masks and Paw Patrol party with a banana pinata planned out for his 5th birthday and dropped all but the Paw Patrol by the time his birthday rolled around.
Posted by Liz Runningmomma at 12:20 PM