I've been telling people for a while that Elise is 2.5 years old and now she's officially 2.5! I can't believe she's approaching her 3rd birthday! I've pulled out some 3T clothes and they fit. It's really hard for me to pull out something I swear Carter was just wearing and it fits Elise. It breaks my heart a little bit to realize how much both of my babies have grown up but they're both at such fun ages! Elise is hilarious and so darn verbal. She's talking all the time and makes me laugh constantly. When we are reading books she always has hilarious observations and comments to make, usually about something random that's not a focal point in the picture. Often times it's a birdy or a kitty or a doggie or a booty. She also randomly stops to dance and will wiggle her booty at Carter because she knows it will make him laugh. Anytime music comes on she jumps up and starts dancing. Her blonde curls flop all over and are beyond precious. Her hair is long enough that she's always swiping her bangs out of her face. She still refuses to let me put a bow or a hair tie in her hair to pull it up out of her eyes. Even when Carter puts one in her hair, she cries and rips it out. Usually her brother can do no wrong! 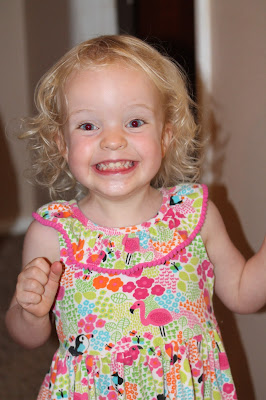 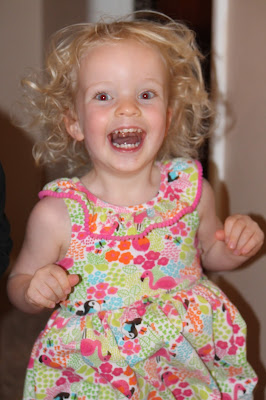 My favorite thing this month has been how she's taken off with her reading. She's always sitting down with a book or bringing me a book to read to her. She loves to look at the pictures and tell me what's happening. Her little asides as we read are the best. She has also gotten to where she remembers lines or parts of books and will read them as she turns the pages. We're Going on a Bear Hunt is one where she'll say some of the words as she goes through the book. Most the time it's, "We're not scared," on each page along with some of the sound words. Then when she gets to the bear at the end she reads BEAR with so much emphasis, it's great. She's always concerned when a character looks sad in a book and is upset for the character. She was even sad when we read Goldilocks and the Three Dinosaurs when one of the dinosaurs was crying because it didn't get to eat Goldilocks. She kept saying, "Dino is sad. Poor dino." When we read books before bed she always has to be sitting right up against me and will get upset with Carter if he sits down before her and takes her spot to the right of me all snuggled in. He usually sits on my lap to avoid getting in Elise's spot while still being right up against me. 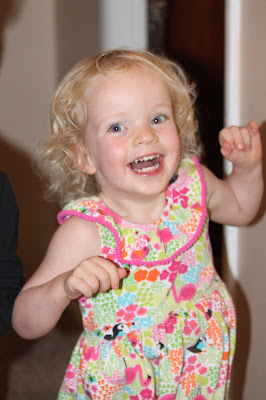 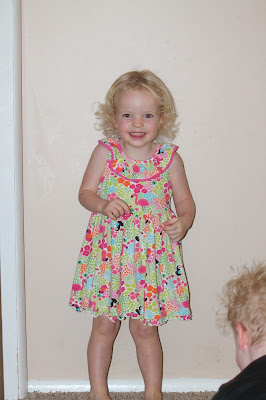 Elise has become more interested in counting. She tries to count along with Carter anytime we are reading a book with counting. When there's a set of 2 or 3 objects she's able to identify the number without counting. The first few times she did it, I was shocked! She can now draw circles and ovals. She recognizes circles, squares, and triangles for sure. She used to call all colors yellow and now she pretty much calls everything green. If I ask her a color's name and she says green and I ask again, she'll typically tell me the correct name. It's so funny. She says banana, bana which is super cute. She still has lots of words that are so darn cute. She still says oranges more like oh-joo which I love. When she's talking and she really wants your attention, she'll grab ahold of your face and turn it toward her. 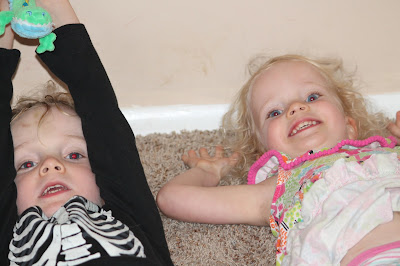 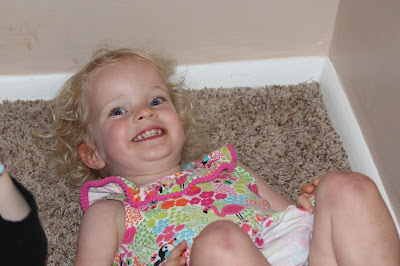 Her sleep is still pretty wonderful with no regressions, thankfully! She goes to bed around 8 and sleeps until 7 most days, sometimes later but rarely earlier. She skipped a nap one day and did way better that afternoon than I had expected. It's something we could get away with if we needed to which is nice to know. When I go to rock her before her nap she requests a book so I let her pick out one of her board books which I read to her while we rock. With Carter in school her nap schedule is a little off. I used to put her down around 1:00 for her nap and she'd sleep until 3 or later, but always at least took a 2 hour nap. Some days if we were busy in the morning I'd even push her nap back to 2:00 and she did great with that. We have to pick Carter up at 2:30 so I like to leave the house a little after 2:00, no later than 2:10. I've been putting her down for her nap around noon on school days and usually have to wake her up so we can pick Carter up. I've noticed with the shorter naps she still does pretty well in the afternoon but she falls asleep much faster at night and hasn't been trying to get out of bed or mess around as much at bedtime. 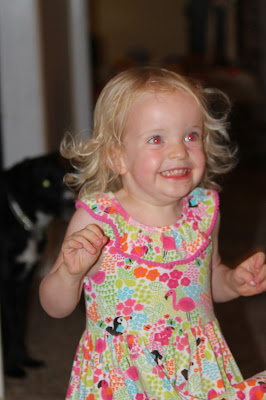 Something interesting she's started just in the last few days is wanting to eat standing up. She'll push her chair away from the table and stand eating off her plate at the table. The first time she did it, she proudly said, "Look at me! I can reach!" Now she just does it. It's so silly. She hasn't been eating quite as much lately and has been wanting to only eat her fruit. Most the time she'll eat the fruit on her plate and then want more so I tell her she can't have more fruit until she eats some of her other food. She's pretty good about trying foods and will eat most everything but would like off oranges and cheese if I let her. She's always pulling a chair over and sneaking Halos or Cuties or whatever we have out of the fruit basket. Then she'll peel them and leave her peels all over the place. It's so annoying! I have to take her orange from her and tell her she doesn't get it back until she picks up her peel. I've tried teaching her to take her peel off all in one place and then taking it to the trash. She does that sometimes and then other times she just walks along peeling it and throwing her peels on the floor. 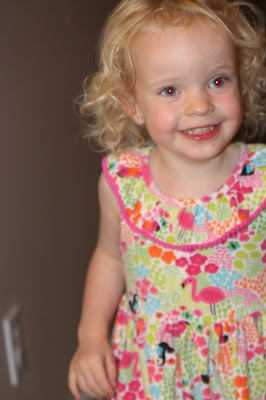 Elise had a huge regression with potty training once Carter started school. I had been taking her everywhere in underwear and she'd only have accidents in her car seat. She started having instances where she'd be standing not far from a restroom but instead of telling me, she'd just potty in her pants. She hadn't had any accidents at home in a long time, even being fully clothed. Then one day she was standing in the living room and just pooped in her pants. I've gone back to immediately taking her clothing off her bottom half when we get home and she's slowly starting to do better at home again. I've been putting her in a Pull-Up when we go out and still taking her to the bathroom when I think she should try. She hasn't gone back to telling me she needs to go like she had been before, but hopefully that will improve as well. It's just a little bump in the road but I'm not going to let it frustrate me or make me upset with her. It's her way of communicating that she's upset with the changes happening around her. She definitely misses Carter and asks to pick him up when he's gone. She is more shy when he's not around and clings to me which she normally doesn't do. It's hard being without your partner in crime! 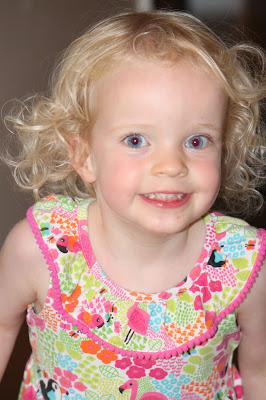 I've noticed that since Carter started school, he and Elise play more together when he isn't in school and they play nicer together. We were at the Children's Museum on Monday and they were going through the tape slide together over and over. Carter would get up the ladder and wait for Elise and helped her when she needed help. It is so sweet. They have really cool robotic dinosaurs at the Children's Museum right now. Elise was terrified of them the first time we went and was even shaking but didn't mind them as much the next time we went. She still loves to play with her baby dolls and uses them as excuses to not help clean up when we are picking up the house. She'll see, I'm feeding my baby, my baby is hungry! She also likes to play with cars, balls, and blocks. Her current favorite thing to play is pretending to be a cat. She also likes pretending to be a dog. She and Carter like to growl at each other and it has become a problem for Elise outside of the house. She will go up to other kids and growl at them, expecting them to play back and they get scared instead. I've been working with her on how to greet others and that growling isn't an acceptable way to say hello. It can be a bit embarrassing at times because it seems like she's trying to be mean or scared other kids when she's really trying to play, but I'll take that over how Carter tried to get other kids' attention which was hitting.

This past weekend we went to a literacy event Thomas was working as a vendor at. I thought the event would be me moving around with the kids at different literacy-based centers. When we got there I realized it was me going to different 30 minute presentations while the kids did crafts and played games in a large room. Elise immediately clung to me and got really upset that I was leaving her. I wasn't sure that she would stay. Then Thomas came in and said he could take her to the vendor area with him. He did and after a while she wanted to go in to play with Carter. Once Thomas left her she had a blast. Thomas went to check on her and found her sitting in a woman's lap playing. I was so proud of her and it was good to know she could do so well being away from me for 2.5 hours! That afternoon at naptime instead of sitting on my lap facing out like usual she wanted to face me with her arms wrapped around my neck while she burrowed her head into my chest. It was the sweetest! I know having her big brother with her helped her to be brave but I was still proud of her! 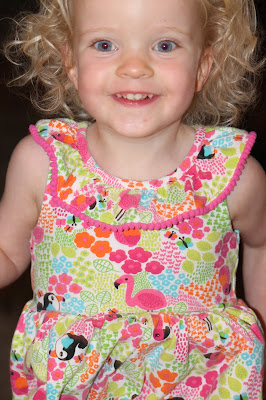 We are half-way to Elise's 3rd birthday and I'm just not quite ready to admit that she's not much of a toddler anymore. She is more of a big girl every day! I am so proud of her and everything she's learning and doing each day. She is the sweetest girl and I love her more than she will ever know! It has been an amazing 2.5 years and I am so glad I get to spend my days playing with her and teaching her! She is my little sunshine!
Posted by Liz Runningmomma at 7:34 PM